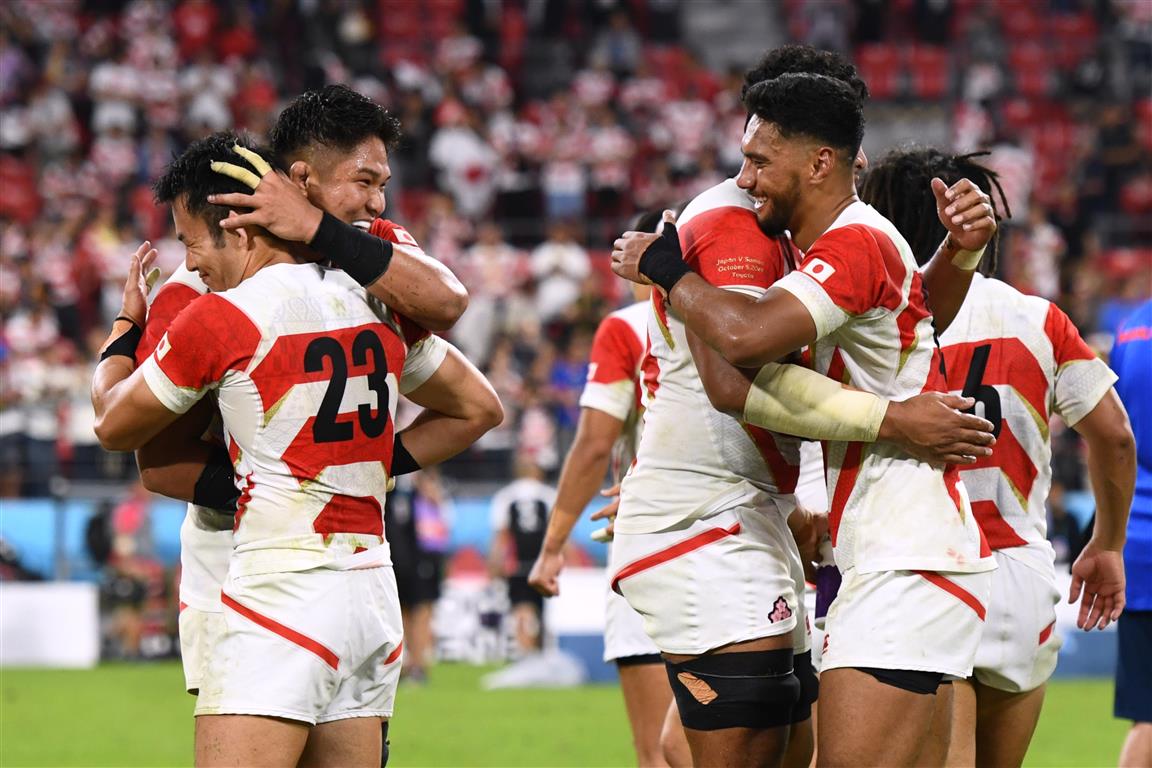 Japan players celebrate their victory over Samoa. Photo: Reuters
Kotaro Matsushima scored a bonus-point try deep into injury time as Japan moved to the brink of their first Rugby World Cup quarter-final with a 38-19 Pool A victory over Samoa at the City of Toyota Stadium on Saturday.

The hosts, who turned the tournament upside down when they beat Ireland last week, moved to the top of the pool with 14 points and also secured their third victory in the pool phase for the second successive World Cup.

The loss ended the Pacific islanders' chances of their first place in the knockout phase since 1995, although the grouping is not likely to be decided until Japan play Scotland in Yokohama in the last game of the pool phase on Oct. 13.

Ireland are second in the pool with 11 points while the Scots, with a game in hand, have five.

"It was definitely hard work out there," Japan captain Pieter Labuschagne told reporters. "It took us a long time. They are a good quality side and they showed it, especially in the first half.

"Luckily for us, we got through in the last minute for the bonus point so we are delighted about the result.

"We know that Scotland will be a really important game, so we will go back to our preparations and get it done."

The opening half was littered with errors as both sides battled to assert themselves, though Japan created the greater scoring opportunities but struggled at the breakdown as Samoa won six turnovers.

The home side took a 6-0 lead through two penalties from Tamura, but a couple of indiscretions at the ruck allowed Samoa to level the score through centre Henry Taefu.

The home side came into the contest intent on a kicking game but that at times meant giving up quality possession, so they switched tactics in the second half with great effect.

Samoa’s disciplinary issues continued when flanker TJ Ioane was sent to the sin-bin for a no-arms tackle, their fifth yellow card of the tournament, and while he was off the field Japan scored their opening try.

Matsushima made an incisive break towards the Samoan line and, after he was brought down five metres short, the ball was fed out to Samoan-born Lafaele to cross over for a 16-9 halftime advantage.

Samoa lost experienced fullback Tim Nanai-Williams just before the break with a head injury, hampering them in both attack and defence.

The teams traded penalties at the start of the second period before Japan scored a second try on 56 minutes to open up some daylight on the scoreboard.

They got a massive shove going in the maul from an attacking lineout and Himeno collapsed over the line.

Samoa, though, showed admirable fighting spirit and, after dominating possession and winning a succession of penalties inside the Japan 22, Taefu crossed to bring them back into the contest.

But Japan, roared on by their home support, drove the ball back towards the Samoan line from the kick-off and Fukuoka crossed in the corner, before the lively Matsushima secured the bonus-point with the final play of the game.

"We will take the lessons from this," Samoa captain Jack Lam said. "We've still got one game to go (against Ireland).

"Japan have set the tone in our pool. We threw our best punch but couldn't come up with a winner there."