There is a saying in sport, or in life, really, that the harder you work the luckier you get.

Every overnight success comes from 20 years of hard work.

Jamie Joseph has coached the Japanese team into the quarterfinals of the World Cup - the result of three years of planning and a work ethic which has never let up.

But Joseph is a worker, a guy who never takes a short cut. He believes hard work will get rewards and solid preparation will go a long way.

He has had the Japanese team in camp for 340 days in the past year. He has developed a game plan and got them as fit as possible for it. He hauled veteran Luke Thompson back into the Japanese team.

He has used the Sunwolves as preparation for the World Cup by bringing Japanese players in and out of Super Rugby this season, giving players a teaser of what was expected. 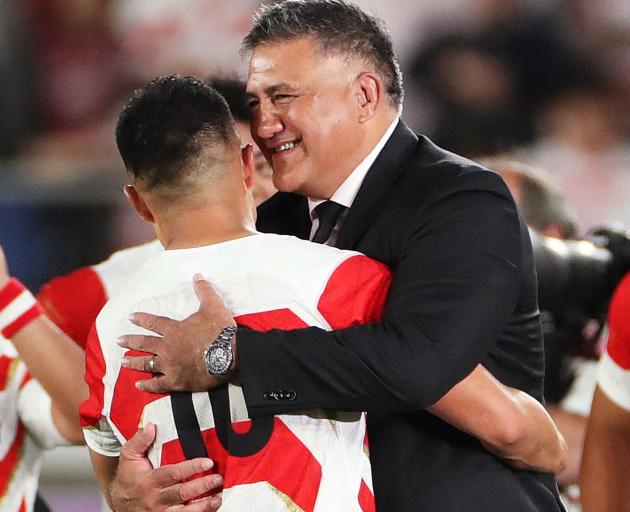 Japan head coach Jamie Joseph embraces one of the players, Yu Tamura, following the team's win against Scotland in Yokohama on Sunday night. PHOTO: GETTY IMAGES
He toured the Wolfpack team to New Zealand earlier this year. The side was, in essence, the Japan A team and contained many of the players who have gone on to play for Japan at the World Cup. The side tested itself against shadow Super Rugby teams.

Now, superbly fit and instilled with confidence by Joseph and his deputy, Tony Brown, the Japanese have come through unbeaten in pool play at the World Cup.

Joseph (49) showed his work ethic when at the Highlanders, where he coached for six seasons, winning the title in 2015.

In Dunedin, he used to start work before the sun came up - and that includes in the middle of summer. Work began about 5am and he was the last to leave most days.

He spent a long time away from home - as Super Rugby coaches do these days. Time spent on planes returning from games was spent in analysis on the laptop computer of next week's opponent and his own team's effort.

Game plans were set in advance and getting a bit of steel back into the Highlanders' game was a hallmark of his early years.

Sure, ability usually wins out. But grit and determination got Joseph's sides a few wins in the early years. He knew how to set the environment to get the team playing as well as it could.

Take a look at those teams in the early years and they were not dripping with talent. But smart coaching got them over the line.

Following a disastrous 2013 season with the Highlanders, when a team of stars won just three games, he trotted off to Australia. There Joseph watched league coach Wayne Bennett go about his work. Bennett, seen as a coaching guru, showed Joseph results were not the be-all and end-all of playing games.

It was about performance, maintaining standards and playing to your best at the right time.

Joseph brought in Brown in the next year and the Highlanders have been in the playoffs ever since.

The title win in 2015 was the climax of the previous five years. Some canny selections - think Aaron Smith, Lima Sopoaga and Malikai Fekitoa - helped but others - come on down Jake Paringatai, Doug Tietjens and Colin Slade - faltered.

Joseph, though, improved as a coach and knew how to press the buttons. Most importantly, he got good players.

The same thing now has happened with Japan. Joseph and Brown have repeated what they did with the Highlanders. They have brought a team of promise and grit to the big dance.

The South African challenge may be too much come Sunday but the host team is a decent starter's chance.