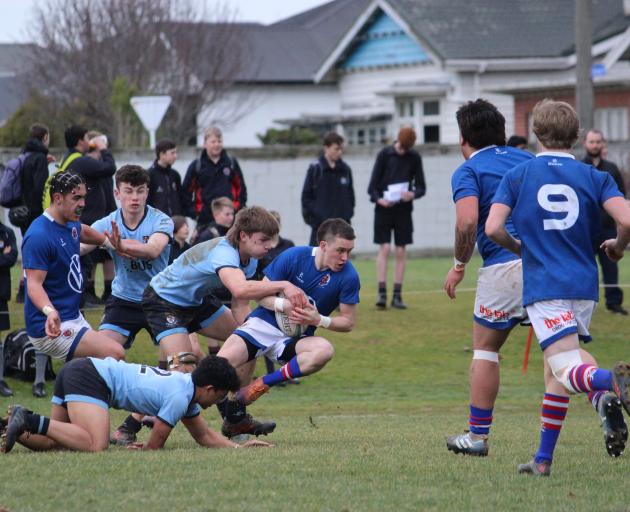 Southland Boys’ first five-eighth Kaea Nikora-Balloch is tackled by King’s openside flanker Jay Davis during their interschool game in Invercargill yesterday.
King's may want to get a campaign under way to reduce the width of a post.

About 2cm was all that separated the team from victory as opposed to having to settle for a draw with a determined and gutsy Southland Boys’ in Invercargill yesterday.

The score was locked 24-24 with about seven minutes remaining when winger Ryan Waterston struck the post with a penalty attempt from 40m out.

There was more drama left in the game but neither side could break the deadlock during the interschool fixture.

The match also doubled as an Otago Premier Schools encounter and both teams remain unbeaten in the tournament.

King’s is on top, though, as Southland Boys’ had a second draw earlier in the competition.

The visiting side had gone into the game as favourite but co-coach Ryan Bambry was not too disappointed with the outcome.

"While we didn’t get the result we desired, we stayed in the fight and we are really proud of the boys." 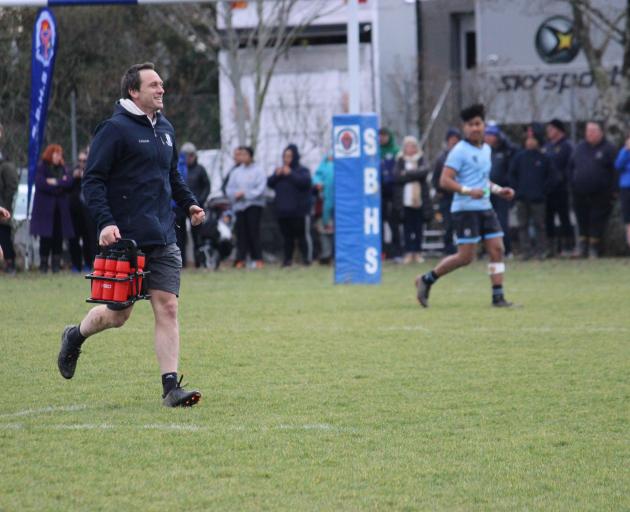 King’s led 17-12 at the break and increased the lead to 24-12 when tighthead prop Mahonri Auva’a crashed over from close range shortly after the resumption.

He carried strongly and was named player of the game by the Sky broadcasting team.

But if the King’s faithful thought their team might be about to pull away, they quickly had to readjust their expectations.

Southland Boys’ responded through a try to impressive hooker Jack Taylor. He got himself at the back of a drive from a lineout.

Then tidy first five-eighth Kaea Nikora-Balloch set up the try of the game when he ghosted through a gap in the midfield and got off a nice pass.

The next two players performed their part with a draw and pass before right winger Gareth Turnock provided a quality finish.

He bumped off the last defender and scored in the corner.

"We knew they would come back but we certainly did miss a couple of opportunities. But to their credit they showed real tenacity," Bambry said.

"It was probably just a good advertisement for schoolboy rugby, really.

"Both teams weren’t willing to give an inch.

"But we’ve got them again in 10 days time so we will look to right the wrongs then."

King’s had a very useful water boy helping out.

Former All Black outside back Ben Smith made the trip to Invercargill to help out his old school with some sideline tips.