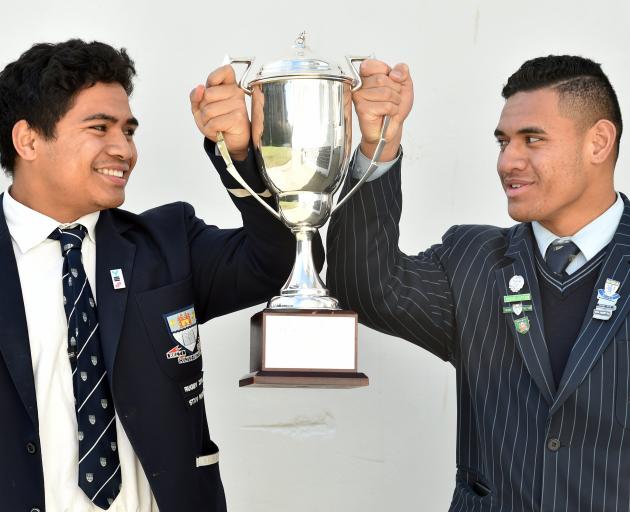 It was 2007 and most of the current team had either just started school or were about to. Now they are charged with ending the 12-year long drought.

Otago Boys' has dominated the fixture in the past decade and will start as hot favourite to retain the Otago Daily Times Cup in the Otago schools premier final at a muddy Littlebourne this afternoon.

The teams have played twice this season. Otago Boys' recorded a comfortable 44-0 win early on.

But late last month King's showed it has closed the gap. It lost 26-11 but had its moments.

King's co-captain Giovanni Leituala is in his third year with the side and would love to get one up on his rivals.

"They're a good side so we cannot afford to make mistakes and we will have to execute our game plan and tackle hard, I guess," Leituala said.

The hard-hitting midfielder shapes as a key figure on defence. He loves cutting down his opposition.

And while he has handed on the goalkicking duties to fullback Ryan Watterston this season, his tactical kicking and ability to read the play is a massive asset for King's.

Fellow co-captain Izaak Parata is another instrumental player. He has been a force at the back of the scrum and will be looking to get his side rolling forward with some punchy runs around the fringe of the ruck.

"I know it has been a long time since we beat them. But we feel like we are getting better every time we play them," Leituala said.

Otago Boys' captain Tevita Asi is in his fourth season with the side. The first five-eighth scored a vital try to help clinch a tense 24-17 win against John McGlashan College in the final last year, so he has big-game experience.

His touches will go a long way towards determining the outcome.

"Definitely," Asi responded when asked if the team was feeling confident.

Otago Boys' is unbeaten in the tournament this season, so that confidence has been earned.

It is also playing with a little more enterprise these days, although the conditions at Littlebourne will not lend themselves to running rugby.

"[The conditions] are probably not what you want on a normal Saturday. But this is home and there is a lot of tradition and history at this field.

"No matter what the paddock is like, it is pretty good to have it here."

Asi said the team still played a structured game but within reason.

"We want to have a bit more flair in our game plan.

"You can just have more fun with it and footy is all about having fun."

Outside Asi, midfielder Jake Te Hiwi is an influential player and winger Michael Manson knows his way to the line.

Up front, Otago Boys will look to loose forwards Taylor Dale and Oliver Griffin, while locking pairing Caleb Hughes and Levi Turoa should ensure a steady supply of ball.

- Channel 39 will broadcast the game at 9.30 tonight and repeats will be screened tomorrow at 1pm and 7pm. The game can also be watched at www.odt.co.nz from 6pm.