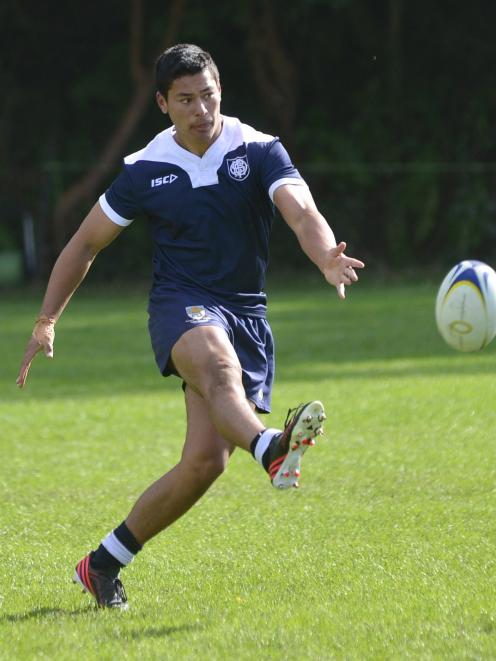 Highlanders centre Sio Tomkinson playing for OBHS in 2013. Photo: Peter McIntosh
Many players at a young age are tipped to rise through the ranks.

Go to the big dance. All Blacks, if not more.

But reality is somewhat different.

Being a star at high school often means nothing when you head to the next level.

The grind of the game gets many players down, injuries take a toll and there are simply other priorities.

But the Otago Boys’ High School First XV of 2012 had a side which has produced plenty of talent further up the chain.

Of the starting XV which played against St Kentigern College in the national top-four final in Auckland in September 2012, nine of them have gone on to play at first-class level.

For a school side, which is not a representative side, that is an impressively high percentage — 60% — of players going to the next level.

The side had Sio Tomkinson at centre. He has been picked for the Highlanders and Otago and was named in the South Island squad.

Ben Miller is a match-winner for Kaikorai at first five-eighth but played wing for the school team. He played one game for Otago last year.

The side was captained by halfback Josh Renton who played for Otago and the Highlanders. Josh Dickson, who had to leave the final after breaking his thumb, has played for Otago and the Highlanders while locks Shay Kerry and Troy Callander both played at the next level. Kerry was English and went home shortly after leaving school. He ended up playing in England and France.

Callander played for Bay of Plenty, heading north straight out of school and then headed overseas.

Prop Jermaine Ainsley headed to family in Perth, is now playing for the Rebels and has played for the Wallabies.

He is now playing in Japan.

St Kentigern College was also a handy side. It had eight players who went on to play at first-class level including Blues players TJ Faiane and Blake Gibson.

It also had Suilasi Vunivalu on the wing, who signed with the Melbourne Storm league team shortly after leaving school.