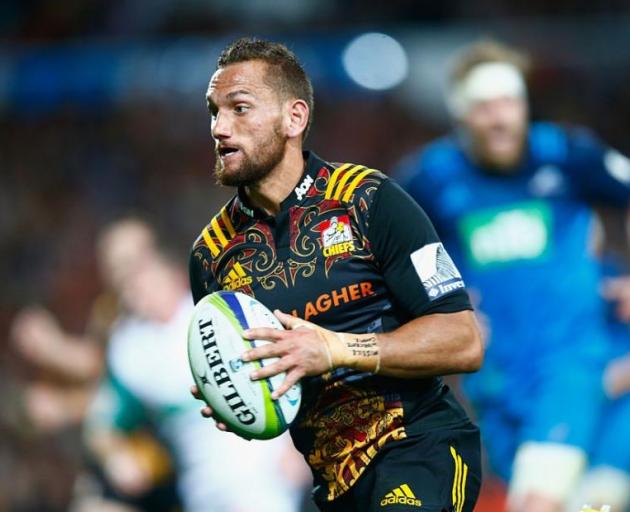 The 31-year-old first-five is heading to Japan to join the Kobe club. Photo: File
Cancer survivor and World Cup winner, the curtain has fallen on Aaron Cruden's time in New Zealand rugby, with the former All Black left out of the Chiefs final Super Rugby Aotearoa match of the season.

The 31-year-old first-five is heading to Japan to join the Kobe club.

He returned to the Hamilton-based side this season after a couple of years in France, and while he's loved being back, the Chiefs are winless in Super Rugby Aotearoa and have just one match left to send Cruden off on the right note.

Aaron Cruden of Ngāti Tūwharetoa played his 100th game for the Chiefs last weekend in Hamilton and his teammates marked the milestone with an emotional haka.

But the former All Black and New Zealand Māori rep never thought he would make it this far.

"When I look back on it now I feel very fortunate and privileged to have played professional rugby for as long as I have.

"In a contact sport like this things can change very quickly and be taken away from you quickly. Representing the All Blacks was a childhood dream that was amazing and to play 100 games for a team (Chiefs) that I love and am very passionate about, makes me very proud."

In 2008 Cruden made his Manawatu debut, but his first season was cut short after five games.

The then 19-year-old was diagnosed with testicular cancer that had spread to his lungs.

He should have been playing his first season of provincial rugby, but instead spent nine weeks in and out of hospital having the testicle removed and chemotherapy.

Each game since his then he's written his patient number on his wrist tape.

"When you're that age you think you think you're a little bit invincible, a bit of a superman. So to be rocked by something like that so early on, I think it probably gives you bit of mental resilience, a little bit of toughness and experience to get you through dark times.

"It makes you stronger knowing that no matter what you're faced with, you can get through."

Cruden started Super Rugby with the Hurricanes in 2010 and made his All Blacks debut with the All Blacks the same year.

He would play a vital role in the All Blacks 2011 World Cup triumph, after being called into the squad as an injury replacement for Dan Carter.

The playmaker dropped a goal in the All Blacks semifinal win over Australia and would start the final against France, before going off injured late in the first half.

A world cup winner with just two years of Super Rugby under his belt and a proud Palmerston North product, Cruden could have stayed in his comfort zone at the Hurricanes.

However, he decided to pull stumps and follow Manawatu coach Dave Rennie to the Chiefs in 2012.

"My first Chiefs game I got charged down by Jason Rutledge against the Highlanders. They scored a try and we lost," he said with a laugh.

However, the shift north would prove inspired, with Cruden overcoming the early hiccup to guide the Chiefs to back to back titles in 2012 and 2013.

"It was a bit of an unknown at that time with a new coach coming in and a lot of new players at the franchise.

"Looking back on those two years, 2012 especially, to be a part of it, to be a young first-five was pretty cool and I think those two seasons set me up for the career I've been able to have"

Thought it hasn't all been glory and honour, with Cruden involved in couple of off-field incidents that threatened to derail that career.

In 2014 he went out drinking and missed the All Blacks flight to Argentina, resulting in his suspension from the side for the Rugby Championship matches against the Pumas and Springboks.

"It was a bit of a rude awakening to be fair. It's something I look back on and I'm not very proud of, in terms of how I conducted myself.

"You are held in a certain regard (as an All Black) and you've got to uphold those standards through your actions and the way you hold yourself. It was obviously not my finest moment, but I tried to learn from that mistake and grew as a person."

Cruden left the Chiefs and New Zealand rugby for France in 2017 but returned this year for one last hurrah.

"Really grateful that the Chiefs gave me an opportunity to come back and have another run around in New Zealand. The results haven't gone our way but I'm proud of the boys and the way they come into work not looking for excuses and ready to go to work, no matter the outcome on the weekend."

The Chiefs have lost seven straight games in Super Rugby Aotearoa and they have one final chance on Saturday night against the Hurricanes in Wellington, to give Cruden that winning feeling one last time.