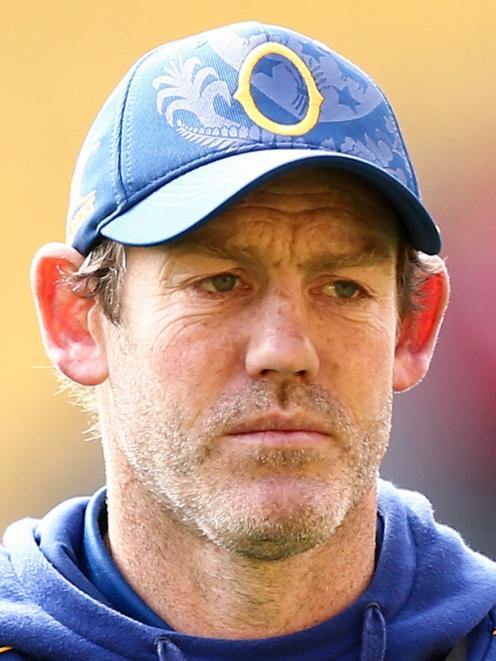 Tom Donnelly.
Otago will be wanting to shovel the ball wide as fast as it can.

Coach Tom Donnelly has made a few tweaks to the side for its match against Manawatu in Palmerston tomorrow afternoon.

There are three changes in the backline and a couple up front.

Perhaps the most notable switch is the decision to shift captain Michael Collins from
fullback to centre.

Collins made an impact for the Highlanders when he played in the midfield and his presence at No13 should have a steadying influence.

He is a good communicator and his shift also allows Vilimoni Koroi to move from wing back to fullback where is arguably best suited.

Exciting winger Freedom Vahaakolo is promoted from the bench and will start on the right wing.

Centre Josh Timu drops to the bench, while fellow midfield Sio Tomkinson picked up a red card in the 81st minute of the loss to Auckland last weekend and has been suspended for six weeks.

Up front, George Bower will start ahead of Jonah Aoina at loosehead prop and Josh Hill drops to the bench to make room for Jack Regan in the starting XV.

Impressive University No8 Sean Withy has made the game-day squad and will make his first-class debut should he see game time.

Manawatu has named a couple of high-profile players. All Black and Highlanders halfback Aaron Smith will make his first appearance for Manawatu, his home province, since 2011, and Nehe Milner-Skudder is at fullback.

The Turbos lost 43-26 to Northland in Whangarei on Sunday, while Otago suffered a 38-6 lost to a talented Auckland side at Forsyth Barr Stadium on Saturday.

Timu said both sides would be looking to bounce back from a tough start to the competition.

"We are just looking to get back up on the horse and get our first win," he said.

"We’re looking forward to going up there and showing everyone what we’ve got to offer, really."

Otago boasts some dangerous players out wide and the plan will be to get them the ball.

Collins’ relocation will help facilitate that. Last season Koroi and Jona Nareki, who has been named on the left wing, were in devastating form for Otago.

The side is viewing the season like a climb up Mount Everest.

Each week they want to draw a metaphorical line in the snow which they hope never to drop below.

Timu expects Manawatu will lean heavily on Smith and fellow halfback Jamie Booth, who has actually been named on the wing, to generate play.

"They are big threats out there. They love to control the game and run from No9 and set everything up from there.

"We’ll look to shut them down and if we can do that, hopefully we can get some good go forward ball and look to attack them through our backs who are looking quite good at the moment."