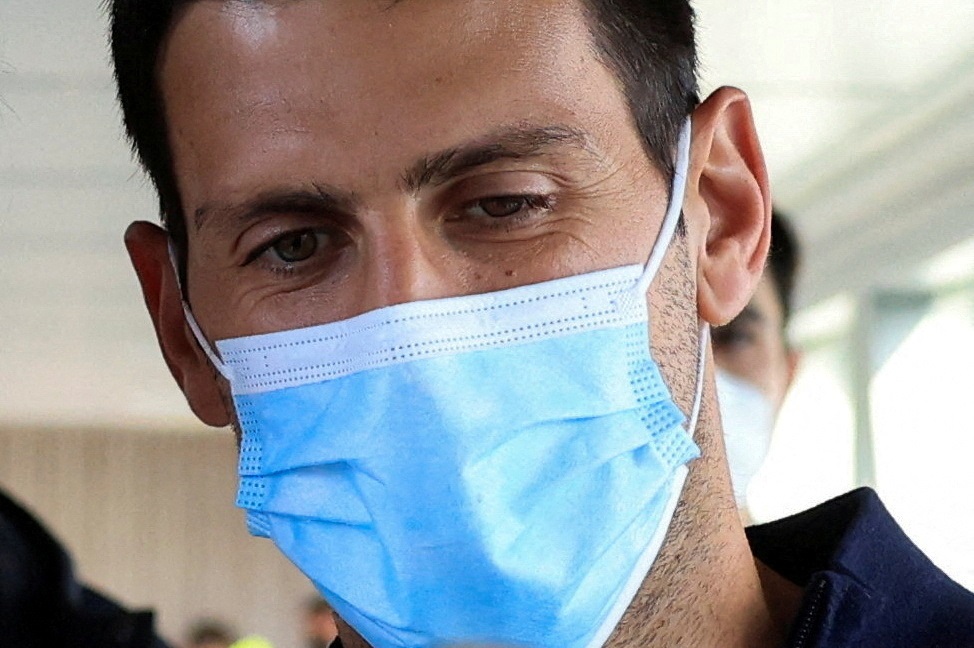 An unvaccinated Novak Djokovic was deported from Australia this week. Photo: Reuters
The pandemic has blocked Novak Djokovic's march to tennis history, so the 34-year-old may be pinning his hopes on a cure for Covid-19 to get his hands on another glorious grand slam before time runs out.

The Serbian superstar, who became a focus of the global vaccine debate over his failed attempt to enter Australia without being inoculated, holds a majority stake in a Danish biotech firm aiming to develop a treatment to counter Covid-19, the company's chief executive told Reuters.

QuantBioRes boss Ivan Loncarevic, who described himself as an entrepreneur, said the tennis player's acquisition of the 80% stake was made in June 2020 but declined to say how much it was.

The company is developing a peptide, which inhibits the coronavirus from infecting the human cell, expects to launch clinical trials in Britain this summer, according to Loncarevic, who stressed the firm was working on a treatment, not a vaccine.

The CEO said the company had about a dozen researchers working in Denmark, Australia and Slovenia. According to the Danish company register, Djokovic and his wife Jelena own 40.8% and 39.2% of the company, respectively.

A spokesperson for Djokovic (34) did not immediately respond to a request for comment.

Djokovic has enjoyed phenomenal success - Forbes listed him in the world's top-50 highest paid athletes for 2021. It calculated his on-court earnings at $US4.5 million ($NZ6.6 million), dwarfed by the $US30 million it said he earned off court.

Yet time may not be on the world No 1's side in his quest to be viewed as the greatest player is history, as he advances deeper into his 30s.

He had desperately hoped to play in Australian Open this month with his sights firmly set on netting a 21st grand slam title, which would move him above arch-rivals Roger Federer and Rafa Nadal, who both have 20.

Frustrated Djokovic now risks being frozen out of tennis, with rules on travellers who are unvaccinated tightening in the third year of the pandemic and some tournaments reconsidering exemptions.

The most immediate concern is the next grand slam - the French Open in May, where clay court king Nadal has already amassed a staggering 13 titles - after the country's sports ministry said on Monday there would be no exemption from a new vaccine pass law.

Triple Australian Open champion Mats Wilander believes  Djokovic has a responsibility to tennis to get vaccinated against Covid if he wants to continue his stellar career.

The Swede doesn't believe the world No 1 can expect to carry on playing at the top level if he doesn't change his mind over the vaccination issue.

"If you can't continue your sport, then I think you have to lead by example.

"And Novak Djokovic, he's at the height of his career, so I think he needs get vaccinated because he has that responsibility to the sport as well a little bit - unless he just wants to walk away and quit, and that's his personal choice."

Asked if he believed the Djokovic, who would have been competing for a record 21st men's grand slam singles title if not for losing his legal battle to stay in Australia, was really willing to jeopardise his career over the issue, Wilander added: "I don't think so."

Wilander's comments follow those of the Serb's former coach Boris Becker, who said after Djokovic's expulsion: "The way out, the easiest thing for him, would be to get vaccinated.

"I'm sure the French Open has watched this saga; I'm sure Wimbledon has watched it. Let's see, but the government restrictions will be there in May and June, I'm sure."

The Spanish government has also said Djokovic, who owns a property in Marbella, should 'lead by example' and get vaccinated against Covid, while the player, back in Serbia after flying home to a hero's welcome, is still keeping his own counsel.