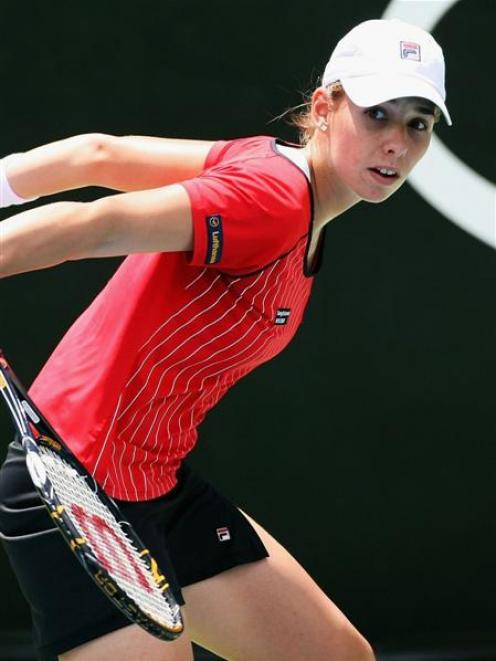 Marina Erakovic, of New Zealand, plays a backhand during her match against Nuria Llagostera Vives, of Spain, during day two of the ASB Classic at ASB Tennis Centre in Auckland yesterday.
If you ever needed an example of how one quality player can lift a sport, just look at what Marina Erakovic has done for tennis.

Tennis New Zealand chief executive Steve Walker was in Dunedin this week to check up on the progress of Tennis Southern since its restructuring.

He told the Otago Daily Times Erakovic's success on the world stage had increased the sport's exposure.

"Our media file for all of '07 was that thick, collectively," he said, indicating a modest amount with his hands.

"But our media file this year is bigger than that already.

"We send out media releases every day and it helps. But since Marina's been winning, it has more than doubled.

"Just people in general are having positive thoughts about tennis now, and a lot of it is to do with Marina."

Erakovic is representing New Zealand at the Olympics and Walker is optimistic about her prospects.

"Anything is possible at the Olympics. Based on her French Open and Wimbledon results, if she can continue with that pattern, she is a chance for the last 16 or better."

Tennis NZ underwent some major restructuring 12 months ago, with Sparc investing $1.5 million over three years in an attempt to revitalise the sport.

Tennis NZ reduced its 25 associations to six regional centres with the aim of having a more unified national approach to achieve its strategic goals.

These include creating a sustainable financial model, delivering an accountable high performance programme and creating stronger pathways to introduce people to the sport.

The regional centres are responsible for the delivery oftennis programmes, competitions and tournaments in their regions.

Tennis Southern chief executive John Crawford-Smith, who started in the role in February, said he was committed to growing the sport in the South.

"There are a lot of sports in New Zealand that are struggling but tennis has drawn the line in the sand and said `this is what we have to do'.

"It is not going to be easy but this is what we are committed to do," he said.

Walker said he was very pleased with the progress Tennis Southern had made since the restructuring.

He was also satisfied with progress on a national level.

Tennis NZ had set a target of a 10% to 15% improvement in its top five elite men, women, boys and girls over the past 12 months and had met those targets.

"We're working very hard to put the support, encouragement and opportunities in place so we can keep getting that improvement," he said.