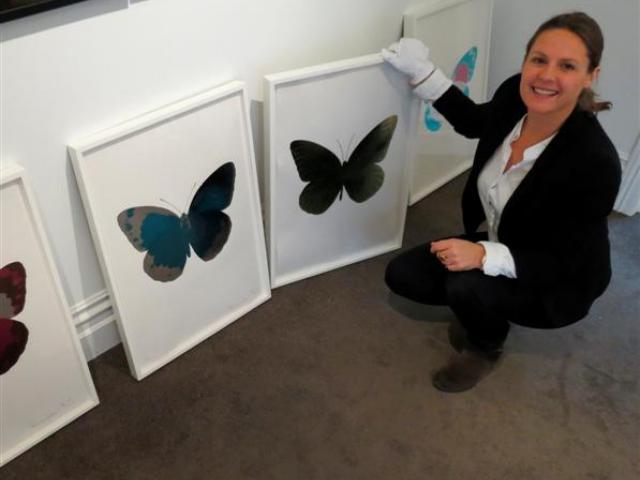 Limited edition works by controversial British artist Damien Hirst are in demand more than a week before they are due to be shown in an Arrowtown art gallery.

Artworks by esteemed Southern painters who are now deceased have been released on the market after years in a private Queenstown collection.

A Central Otago artist who represented New Zealand in a "World Artists Exhibition" in the United Kingdom will attend the opening of his exhibition in a Queenstown gallery tonight.

One person's rubbish is another's treasure.

An exhibition with a difference opened in Dunedin last night.

I Thought My World Made Sense, But Then a Goldfish Swam By (2012) is one of a new "gaggle of paintings to amuse and confuse" to arrive from quirky Christchurch painter Tony Cribb, in Artbay Gallery.
Entries for the Black Gold Kai Club Matariki Recyclable Arts Competition close on Friday.

Floral art came to life on the stage in Balclutha last weekend with an event hosted by a North Island florist to celebrate 45 years of floral art in South Otago.
The man hoping to establish a multimillion-dollar art gallery in Wanaka remains "very committed" to the project and is hopeful the results of a feasibility study due out soon will help generate the required capital.

When prominent New Zealand artist Rita Angus painted a self-portrait in Wanaka in 1939, little did she know the image would become the catalyst in arts patron John Charrington's dream to build a multimillion-dollar art gallery in the town.

A University of Otago art historian says he is shocked and feels "a sense of fascinated horror" after four New Zealand artefacts entrusted to a British museum turned up for sale on the open market.

Transforming someone else's junk into a kiwiana treasure is a pastime and a passion for Cathie McCarthy.

Barry Mackenzie wishes his late wife Else could see his exhibition at the Forrester Gallery in Oamaru.

The harbour mouth molars in Portsmouth Dr are now illuminated at night.

A Queenstown art gallery has come to the rescue of a new Christchurch gallery destroyed in the magnitude 7.1 earthquake which struck Canterbury on September 4, just before the owner was set to move in.

The moment was hardly spiritual, not with 200 people crowded inside, the drone of hushed conversations and the incessant bellows of "no pictures" and "shush" from the security...

In the appendix on page 17 of Creative New Zealand's "Review of Recurrently Funded Organisations" it is written in black and white: "Support is available for at least three theatre companies to create and present high-quality New Zealand theatre: one in each of Christchurch, Auckland and Wellington".

A painting of houses on Dunedin's Dundas St with chairs and couches outside is the overall winner in this year's Yellow Art Awards.

On the outside, it is just another big rig.

The preferred artist of Sir Edmund Hillary, who was recently awarded a Queen's Service Medal for services to the arts and is the newly commissioned Wakatipu heritage artist, is the latest artist in residence working at Artbay Gallery, in Queenstown.