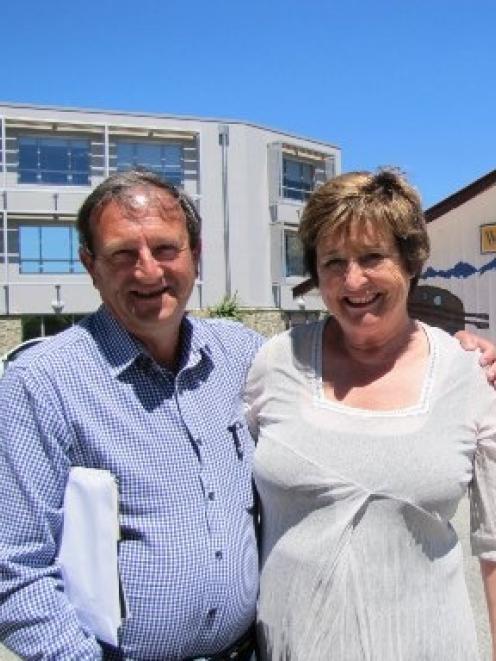 John Charrington and Pamela McBride are spearheading a project to establish a multimillion-dollar art gallery in Wanaka. Photo by Lucy Ibbotson.
When prominent New Zealand artist Rita Angus painted a self-portrait in Wanaka in 1939, little did she know the image would become the catalyst in arts patron John Charrington's dream to build a multimillion-dollar art gallery in the town.

His vision is gaining momentum since concept plans for the proposed 1500sq m two-and-a-half-storey facility were unveiled earlier this year.

In August, the proposed gallery, to replace the existing Wanaka Arts Centre building behind the Lake Wanaka Centre, gained strong support from the Wanaka Community Board, which approved in principle a ground lease for the site.

Mr Charrington has since established the Lakes District Gallery Foundation, which is in the process of getting approval from the Charities Commission and awaiting lease confirmation from the Queenstown Lakes District Council before it proceeds with a feasibility study for the project.

Mr Charrington, a British national, has an extensive background working in financial markets and on fundraising projects and lives in Sydney with his Australian partner, Pamela McBride, for about five months each year.

They spend the remainder of their time living at their property in Wanaka, which they built just over five years ago, enjoying the "contrasts" between their two homes.

"I think Wanaka's the most wonderful place. I love it," Mr Charrington said.

The couple share a love of art, which prompted them to become founders and main sponsors of the annual South Island Aspiring Art Prize, a Wanaka-based exhibition, which celebrated its fifth anniversary this week.

"Art is something we both love. I wouldn't say we know much about it - we don't.

"But we love it. A member of my family teaches it; Pamela likes drawing; my grandmother was an amateur artist; and my great grandfather was a patron of the arts.

"It's sort of in the blood, you might say," Mr Charrington said.

"Whenever we go anywhere, if we see a gallery we'll always go in and have a look, and that's certainly given us some good ideas about the initiative in Wanaka."

" As a result of meeting and talking to people through their involvement in the art prize, the need for an art gallery in Wanaka became "a common sort of theme", Mr Charrington said.

The ultimate inspiration, though, came via the couple's subscription to the National Gallery of Australia's quarterly magazine Artonview , which featured an article on the gallery's latest acquisition, Angus' Wanaka self-portrait, painted on the eve of World War 2.

It was an artwork Mr Charrington felt rightfully belonged in Wanaka, - if only there was somewhere to hang it.

The proposed facility would be capable of hosting small ensemble recitals and high-calibre national and international exhibitions in three separate galleries, as well as offering activity space for the arts and a small sculpture garden.

An education centre would be a key component.

"Not only for primary and secondary students but also for adults. People like to learn about art," Ms McBride said.

"They did a survey in Australia that showed more people go to art galleries on the weekends than sporting events."

While Mr Charrington was unable to offer a cost estimate for the facility yet, necessary features such as climate control, lighting and security would make it a multimillion-dollar project.

The bulk of the funding for the art gallery would come from private donors and community trusts.

He was confident the gallery proposal would attract funders, whose input could be acknowledged via gallery or exhibition room naming rights.

"It's a once-in-a-hundred-years' opportunity ... How often do public galleries get built? Not too often.

"In the first half of the year, I think we'll get a good idea of the sort of money we're going to attract."

Already, about $25,000 worth of professional advice and input had been offered free of charge by lawyers, accountants, architects, surveyors, public relations specialists and printing services.

"I've been incredibly touched by it [the support] and I think that just is proof of the support for this type of project, because there's a huge benefit for this town if this gets off the ground.

"If I had the money I'd build the thing myself ... That's how strongly I feel about it."

Mr Charrington said other regional galleries in the South Island were generally not purpose-built.

"By building a specifically designed gallery there's no compromises and, obviously, being new, we've got all the modern technology in terms of lighting, climate control and security, which will allow us to have quality exhibitions from anywhere.

"I would like to think, if we get this built, it will be the best regional gallery, certainly in the South Island."

The couple said, although Wanaka offered plenty of visitor attractions, "cerebral" or "cultural" activities were lacking.

"We think this will fill that void," Mr Charrington said.

"Build it and they will come, there's no doubt about that."

If the project became a reality, it was hoped a "friends of the gallery" society would eventually be established to acquire artwork, so in time the gallery would have its own permanent collection, largely through gifts and bequests.

"It's our little baby at the moment, but once it gets down the track, I'm hoping that it grows up and it becomes a great community asset," Mr Charrington said.

And the Angus painting?

"If we got the gallery built, I would like to think they might loan it to us."