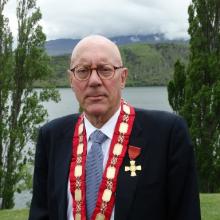 Jim Boult
Queenstown Lakes Mayor Jim Boult has told Lake Hawea residents the council is not blind to the concerns the community has about the permanent chlorination of its water supply.

At a full meeting of the Queenstown Lakes District Council in Lake Hawea yesterday, residents used the public forum to highlight their concerns about the council's plans to permanently chlorinate the water supply.

Hawea Community Association chairman Paul Cunningham said there was a strong opposition in the town to permanent chlorination and a thorough public consultation process was needed.

Until there was a full report from council staff on the chlorination issue, it should not go ahead, Mr Cunningham said.

Hawea Stand for Pure Water spokeswoman Jennifer Rumore said the council had not explored any alternatives to chlorination.

``What we want is for you to research and offer other alternatives to the chlorination of our water. It is precious to us.''

Lake Hawea resident and former Niwa chief scientist Dr Don Robertson told the councillors he was not against chlorination but was against permanent chlorination without evidence, which he said was the case with this proposal.

More members of the public wanted to speak on the issue but the council allowed only three speakers on one issue during the public forum.

After each of the submitters spoke, there was loud applause from the large number of residents at the meeting.

Mr Boult said he understood it was an emotional issue for the Lake Hawea community but the council needed to make a decision that protected the entire district.

The council was not blind to the concerns people had but it was councillors and council staff who could face prosecution if they had not done everything they could to protect residents from a situation such as happened in Havelock North, he said.