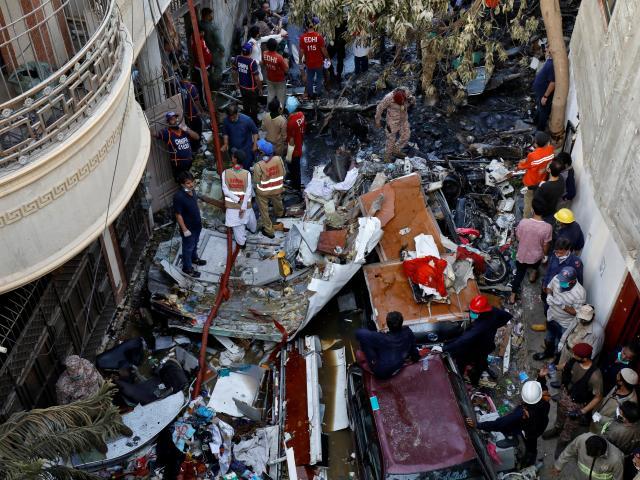 A Pakistan International Airlines Airbus jet with 99 people aboard crashed into a crowded residential district of the city of Karachi after twice trying to land at the airport, a witness says.

A fire swept through a Pakistani train on Thursday killing at least 65 people after a gas canister passengers were using to cook breakfast exploded, the minister for railways said.

A Pakistani Christian woman has been freed from prison a week after the Supreme Court overturned her conviction and death sentence for blasphemy against Islam, and she is now at a secure location for fear of attacks on her.

India and Pakistan have exchanged artillery fire in the disputed Kashmir region forcing hundreds of people to flee, police in Indian Kashmir said, raising fresh doubts about a 15-year-old ceasefire...

Pakistani Taliban gunmen disguised in all-enveloping burqas stormed the campus of an agriculture college in Pakistan, killing at least nine people and wounding 35.

A US-Canadian couple freed in Pakistan this week, nearly five years after being abducted in Afghanistan, returned to Canada on Friday where the husband said one of his children had been murdered...

Ousted Pakistani Prime Minister Nawaz Sharif appeared before an anti-corruption court on Tuesday, kicking off trial proceedings that he says are biased and which threaten to dent his party's chances at the next general election due in mid-2018.

The US has put more pressure on Pakistan to help it with the war in Afghanistan, suggesting it could downgrade Islamabad's status as a major non-NATO ally.

A suspected suicide bomber has attacked Shi'ite Muslims as they were leaving a mosque in Pakistan's commercial capital, killing at least 45 people, in another signal Sunni militants are escalating sectarian attacks.

Toppled in a 1999 coup, jailed and exiled, Nawaz Sharif has made a triumphant election comeback and was heading for a third term as Pakistan's prime minister.

Pakistan's Supreme Court has ordered the arrest of the prime minister on corruption allegations, ratcheting up pressure on a government that is also facing street protests led by a cleric who has a history of ties to the army.

Defense Secretary Leon Panetta says the United States is reaching the limits of its patience with Pakistan because of the safe havens the country offered to insurgents in neighbouring Afghanistan.
Pakistan's Supreme Court has ordered police and government officials to fly to a mountain village to investigate whether four women were killed for clapping and singing as men danced at a wedding.
US senators scandalized by Pakistan's jailing of a doctor for helping the CIA find Osama bin Laden have voted to cut aid to Islamabad by $33 million -- one million for each year in the doctor's sentence.
Militants in Pakistan's tribal badlands bordering Afghanistan have ambushed a military convoy, killing nine Pakistani troops.
A suicide attacker on a motorcycle has blown himself up in a market in a Pakistani town close to the Afghan border, killing 23 Shiite Muslims and wounding 50 people, officials say.
Fighting between soldiers and Taliban militants over a strategic mountaintop in northwestern Pakistan has killed more than 60 people, a government official says.