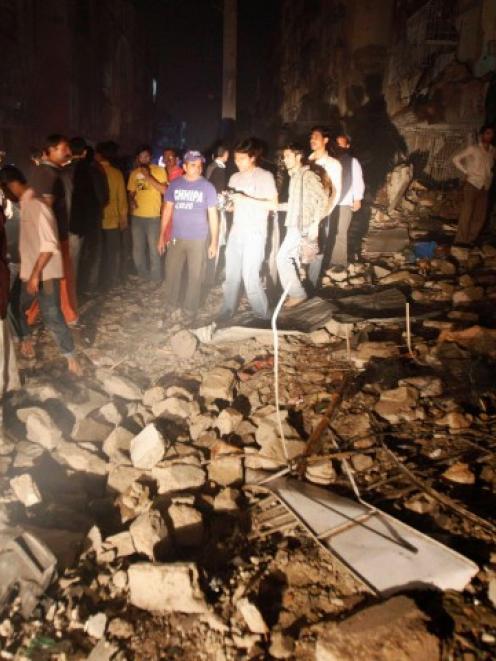 Residents and rescue workers gather at the site of a bomb blast in a residential area in Karachi. REUTERS/Akhtar Soomro
A suspected suicide bomber has attacked Shi'ite Muslims as they were leaving a mosque in Pakistan's commercial capital, killing at least 45 people, in another signal Sunni militants are escalating sectarian attacks.

"It was a powerful blast on a congested Shi'ite-dominated area," senior police official Shabir Ahmad Sheikh.

Senior city official Hashim Raza said at least 45 people had been killed and 149 wounded in the blast in Pakistan's biggest city.

Military offensives and U.S. drone strikes against the Taliban in Pakistan have reduced the number of suicide attacks on government and military targets over the past year.

But Sunni groups, most prominently Lashkar-e-Jhangvi (LeJ), have escalated attacks against Shi'ites, who they believe are non-Muslims.

Bombings targeting Shi'ites have killed nearly 200 people in the city of Quetta alone since the start of the year.

In 2012, sectarian attacks and clashes climbed by 47 percent to 208, according to the Pak Institute For Peace Studies, a prominent Pakistani think tank.

While the Quetta carnage grabbed world attention, a Reuters inquiry into a lesser known spate of murders in Karachi suggests the violence is taking on a volatile new dimension as a small number of Shi'ites fight back.

Pakistan's Western allies have traditionally been fixated on the challenge posed to the nuclear-armed state by Taliban militants battling the army in the highlands on the Afghan frontier.

But a cycle of tit-for-tat killings on the streets of Karachi points to a new type of threat: a campaign by LeJ and allied Pakistani anti-Shi'ite groups to rip open sectarian fault-lines in the city of 18 million people.

Pakistani intelligence agents say the LeJ has become a major security threat in Pakistan, which is also struggling with a fragile economy, dilapidated infrastructure and widespread poverty.

Shi'ite frustrations are rising with each blast. Shi'ites fired weapons in the air on Sunday night in Karachi, a bustling metropolis plagued by ethnic and political violence and crime.

"The explosion was so massive it jolted the entire area," said witness Ali Reza. "Two flats and nearby shops caught fire after the explosion and balconies of various buildings collapsed."

Another witness, Muhammad Kazim, said women and children who were shopping nearby were wounded.