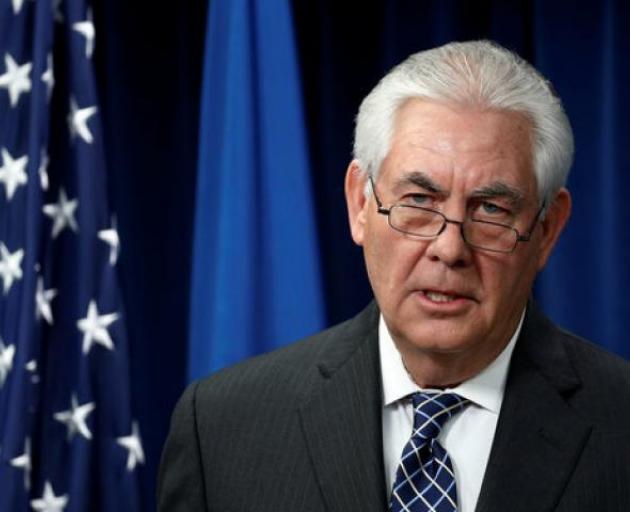 The United States has put more pressure on Pakistan to help it with the war in Afghanistan, suggesting it could downgrade Islamabad's status as a major non-NATO ally if it does not crack down on Islamist militants.

A day after President Donald Trump singled out Pakistan for harboring Afghan Taliban insurgents and other militants, US Secretary of State Rex Tillerson said on Tuesday that Washington's relationship with Pakistan would depend on its help against terrorism.

"We are going to be conditioning our support for Pakistan and our relationship with them on them delivering results in this area," Tillerson told reporters.

US officials are frustrated by what they term Pakistan's unwillingness to act against groups such as the Afghan Taliban and the Haqqani network. Pakistan denies that it harbors militants fighting US and Afghan government forces in Afghanistan.

Tillerson said the United States could consider withdrawing Pakistan's status as a major non-NATO ally if cooperation did not improve.

"We have some leverage that's been discussed in terms of the amount of aid and military assistance we give them, their status as non-NATO alliance partner - all of that can be put on the table," he said.

In a televised address on Monday about America's involvement in Afghanistan, Trump pointed to Pakistan as offering safe haven to militants in Afghanistan, which the United States invaded in 2001.

Successive US administrations have struggled with how to deal with nuclear-armed Pakistan, which has a long porous border with Afghanistan.

Washington fumes about inaction against the Taliban, but Pakistan has cooperated closely with Washington on other counterterrorism efforts, including against al Qaeda and Islamic State militants.

The Pakistani Foreign Ministry said on Tuesday it was "disappointing that the US policy statement ignores the enormous sacrifices rendered by the Pakistani nation" in the fight against terrorism.

"As a matter of policy, Pakistan does not allow use of its territory against any country," it said.

A senior US administration official said on Tuesday that significant measures were under consideration, including possibly sanctioning Pakistani officials with ties to extremist organisations.

Trump committed the United States to an open-ended war in Afghanistan, but the Pentagon has yet to decide how many more US troops to send there as it is still drawing up a plan, Defense Secretary Jim Mattis said on Tuesday.

"Trump's policy of engaging India and threatening action may actually constrain Pakistan and lead to the opposite of what he wants," said Zahid Hussain, a Pakistani security analyst.

The United States has no choice but to use Pakistani roads to resupply its troops in landlocked Afghanistan. US officials fret that if Pakistan becomes an active foe, it could further destabilize Afghanistan and endanger US soldiers.

Trump offered few specifics in his address about Afghanistan on Monday, but promised a stepped-up military campaign against Taliban insurgents who have gained ground against US-backed Afghan government forces.

The Afghan government welcomed Trump's speech, but the Taliban said it would make the country a "graveyard for the American empire."

Mattis said he was waiting for a plan from the US military's chairman of the Joint Chiefs of Staff, General Joseph Dunford, before deciding how many more troops to send to Afghanistan, where the United States is fighting its longest war.

"When he brings that to me, I will determine how many more we need to send in," Mattis told reporters during a visit to Baghdad. "It may or may not be the number that is bandied about."

US officials have said Trump has given Mattis the authority to send about 4000 additional troops to add to the roughly 8400 already in Afghanistan.

Trump authorised Mattis in June to set future Afghan troop levels amid a long and difficult debate in the administration about how to handle the 16-year war.

Trump previously called for a US withdrawal from Afghanistan. On Monday, he said his original instinct was to pull out all American troops but that he was convinced otherwise by his military advisers after a lengthy strategy review.

"The consequences of a rapid exit are both predictable and unacceptable," he said. "A hasty withdrawal would create a vacuum that terrorists, including ISIS (Islamic State) and al Qaeda, would instantly fill."

US forces have been bogged down since in a war that has vexed three American presidents. About 2,400 US troops have died in Afghanistan.

Trump said: "Our troops will fight to win," but stressed that ultimately Afghanistan's police and army must do most of the fighting.

Most of the US troops in Afghanistan work with a NATO-led training and advising mission, with the rest part of a counterterrorism force that mostly targets pockets of al Qaeda and Islamic State fighters.