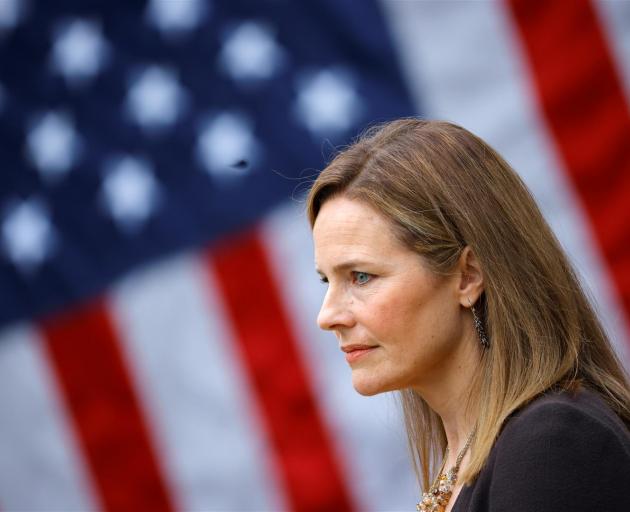 U.S President Donald Trump holds an event to announce his nominee of U.S. Court of Appeals for the Seventh Circuit Judge Amy Coney Barrett to fill the Supreme Court seat. Photo: Reuters
President Donald Trump on Saturday announced conservative appellate judge Amy Coney Barrett as his third US Supreme Court appointment, setting off a scramble in the Republican-led Senate to confirm her before Election Day in 5-1/2 weeks.

Barrett appeared at the White House with Trump as he made the announcement.

"Today it is my honour to nominate one of our nation's most brilliant and gifted legal minds to the Supreme Court," Trump said.

Turning to Barrett, Trump said that "you are very eminently qualified for the job." She and her lawyer husband have seven children, two of whom were adopted from Haiti, and they joined her at the ceremony in the White House Rose Garden.

If confirmed to replace liberal icon Ruth Bader Ginsburg, who died at age 87 on Sept. 18, Barrett would become the fifth woman ever to serve on the top US judicial body and push its conservative majority to a commanding 6-3. With Trump's fellow Republicans controlling the Senate, confirmation appears certain, though Democrats may try to make the process as difficult as possible. If confirmed to replace liberal icon Ruth Bader Ginsburg (pictured), who died at age 87 on September 18, Barrett would become the fifth woman ever to serve on the top US judicial body. Photo: Reuters
Senate Majority Leader Mitch McConnell issued a statement Saturday praising the nomination.

"Judge Amy Coney Barrett is an exceptionally impressive jurist and an exceedingly well-qualified nominee to the Supreme Court of the United States," McConnell said.

Barrett, 48, was appointed by Trump to the Chicago-based 7th US Circuit Court of Appeals in 2017 and is a favourite of religious conservatives, a key Trump voter bloc. Conservative activists have hailed Trump's selection, which surfaced on Friday night, while liberals have voiced dismay.

Like Trump's two other appointees, Neil Gorsuch in 2017 and Brett Kavanaugh in 2018, Barrett is young enough that she could serve for decades. Barrett is the youngest Supreme Court nominee since conservative Clarence Thomas was 43 in 1991.

The White House ceremony was decorated with American flags arranged in a way similar to the day when President Bill Clinton nominated Ginsburg in 1993.

The selection kicks off a flurry of activity that must take place before the final confirmation vote, including public hearings in the coming weeks before the Senate Judiciary Committee.

A White House source said the nominee on Tuesday will begin the traditional courtesy calls on individual senators in their offices, with McConnell up first. White House Counsel Pat Cipollone is expected to shepherd the nomination.

Judiciary Committee Chairman Lindsey Graham, who mounted an angry defence of Kavanaugh during tense confirmation hearings in 2018, has signalled he expects to have Barrett confirmed as a justice by the Nov. 3 election in which Trump is seeking a second term.

U.S President Donald Trump holds an event to announce his nominee of U.S. Court of Appeals for the Seventh Circuit Judge Amy Coney Barrett to fill the Supreme Court seat. Photo: Reuters
Democrats are still furious over McConnell's 2016 refusal to consider President Barack Obama's Supreme Court nomination of Merrick Garland because it came during an election year. Democratic presidential candidate Joe Biden has said the winner of the election should get to replace Ginsburg.

Republicans hold a 53-47 Senate majority. Only two Republican senators have opposed proceeding with the confirmation process.

Jeanne Mancini, president of March for Life, an anti-abortion group, in a statement on Saturday expressed confidence that Barrett "will fairly apply the law and Constitution as written, which includes protecting the most vulnerable in our nation: our unborn children."

Brian Burch, president of CatholicVote, a faith-based advocacy group, added, "Catholics are thrilled with the expected nomination of Judge Amy Coney Barrett and believe she represents the best choice to protect the rule of law and our constitutional rights."

Abortion rights groups and other liberal-leaning organisations announced plans for a protest against her nomination on Sunday in front of the Supreme Court.

Barrett has staked out conservative legal positions in three years on the bench, voting in favour of one of Trump's hardline immigration policies and showing support for expansive gun rights. She also authored a ruling making it easier for college students accused of campus sexual assaults to sue their institutions.

The other finalist mentioned by Trump to fill the vacancy was Barbara Lagoa, a Cuban-American federal appeals court judge from Florida who he appointed last year.

Trump has said he wants his nominee confirmed before the election so she would be able participate in any election-related cases that reach the justices, potentially casting a key vote in his favour. A US presidential election's outcome only once has been determined by the Supreme Court, in 2000 when it clinched Republican George W. Bush's victory over Democrat Al Gore.

Trump has repeatedly without evidence said voting by mail, a regular feature of American elections, will lead to voter fraud. He also has refused to commit to a peaceful transfer of power should he lose the election.

This marks the first time since 1956 that a US president has moved to fill a Supreme Court vacancy so close to an election. In that year, President Dwight Eisenhower three weeks before winning re-election placed William Brennan on the court using a procedure called a "recess appointment" that bypassed the Senate, a tactic no longer available for installing justices.

An emboldened Supreme Court conservative majority could shift the United States to the right on hot-button issues by, among other things, curbing abortion rights, expanding religious rights, striking down gun control laws, and endorsing new restrictions on voting rights.

Yep Trump trumps again. Absolutely no consideration of the wants of the majority of the USA people and McConnell is his enabler. Without McConnell Trump would not be able to run rough shod over the constitution. The sooner Trump and McConnell are chucked out the better for the world at large.

The President is elected for 4 years....Not '3 and a bit'.
Actually, President Trump has a constitutional duty to fill the vacancy in the Supreme Court, and he is doing just that. So your argument that what he is doing is 'unconstitutional' holds no water.

You may not like this, but given the absolute animosity from democrats towards him, why should democrats expect Trump to be Mr Nice Guy?!......They have simply reaped what they have sown.

Funny how you regurgitate the democratic talking points. What effect do Trump and McConnell have on the world? Aside from that, you have no idea what you're talking about with regards to the constitution! Article Three of the United States Constitution establishes the judicial branch of the federal government. Under Article Three, the judicial branch consists of the Supreme Court of the United States, as well as lower courts created by Congress. Established by Article III of the Constitution, the composition and procedures of the Supreme Court including when a vacancy occurs, the president, with the advice and consent of the Senate, appoints a new justice. Trump's decision to fill the vacancy is constitutional. Your assertion that in filling the vacancy Trump is running "roughshod over the constitution" is idiotic! You have no idea what you talking about! RBG was asked to retire by Obama so the democrats wouldn't be in the predicament they now find themselves. RBG chooses not to retire despite having cancer. The democrats got exactly what they deserve. Trump is fullfiling his constituional duties filling the vacancy. Do us all a favor, limit your comments to NZ politics!

How embarrassing! Wrong Den; not even close! The president, with the advice and consent of the Senate, appoints a new justice. Trump is operating within the legal authority of the constitution. Trump will finish his first term on January 20, 2021. He can nominate a replacement all the way up until then, even in the unlikely event that he was to lose the election. Once nominated, it’s the senate's job to ratify or dismiss his nominee. Trump has plenty of time to get his nominee ratified before his term ends. The democrats have made the politics so toxic that Trump will get his nominee through quickly so he has a conservative majority to resolve all the election disputes. Maybe focus more on the NZ elections.

"An emboldened Supreme Court conservative majority could shift the United States to the right on hot-button issues by........"

The key word being "COULD". But most likely they would NOT!

Coney Barrett has already stated she would respect stare decisis, laws that are well-settled and would not vote to change them other than in the most profound and significant situation.
It appears Rueters is trying to create an issue where non exists.

Just more Democrat backed, Virtue Signalling from the anti-Trump leftist media is all.

Appointments to New Zealand's Supreme Court slip through with very little discussion. The Attorney General, David Parker appointed two Supreme Court judges last year. Should we be concerned about their politics or do we hold other countries to a higher standard than our own.