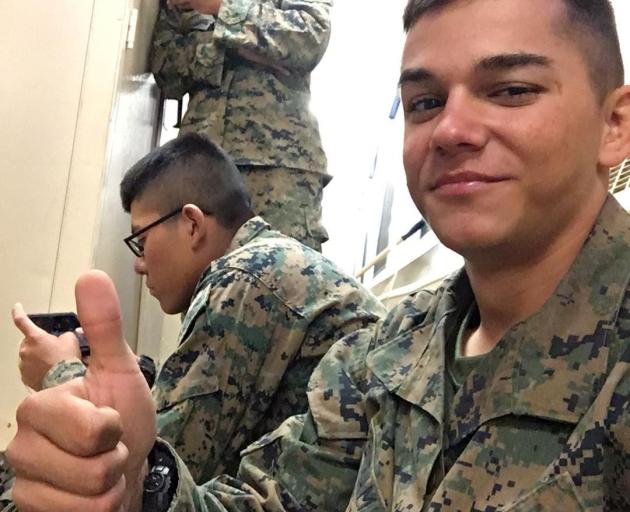 The 20-year-old Marine, who the previous day had sent home a video of himself giving candy to Afghan children, was among 13 U.S. service members killed in the bombing. Others included an expectant father from Wyoming, the son of a California police officer and a medic from Ohio.

"He was born the same year it started, and ended his life with the end of this war," Nikoui said from his home in Norco, California, referring to the 2001 start of U.S. military operations in Afghanistan.

On Saturday the U.S. Defense Department formally released the names of the 13 service members. Four others were aged 20 like Nikoui; as old as the war itself.

Gee had posted photos from her deployment on social media and just days ago she posted a picture of herself in uniform, holding an infant, with the caption, "I love my job."

Islamic State militants claimed responsibility for the suicide bombing, carried out during a massive evacuation of U.S. and other foreign nationals as well as some Afghan civilians following the Taliban takeover.

On Friday, Nikoui was waiting for a Marine liaison to come to his house to help with arrangements to fly him and his wife to an Air Force base in Delaware, where their son's body will arrive in the coming days.

He said he was angry.

"I'm really disappointed in the way that the president has handled this, even more so the way the military has handled it. The commanders on the ground should have recognized this threat and addressed it," Nikoui said.

Also among the troops killed was Rylee McCollum of Wyoming, a Marine who was married with a baby due in three weeks, his sister, Roice, said in a Facebook post on Friday.

"He wanted to be a marine his whole life and carried around his rifle in his diapers and cowboy boots," his sister wrote, adding that he wanted to be a history teacher and a wrestling coach upon leaving the military.

Along with wrestling, McCollum played football before graduating from Wyoming's Jackson Hole High School in 2019.

"Saying that I am grateful for Rylee's service to our country does not begin to encapsulate the grief and sadness I feel today as a mother and as an American," State Superintendent of Public Instruction Jillian Balow said in a statement. "My heart and prayers are with Rylee's family, friends, and the entire Jackson community."

Regi Stone, whose son Eli enlisted around the same time as McCollum, described him as "smart, strong and courageous" and said he drew comfort when the two hung out together.

"We always knew that Rylee had his back and my son his," Stone told Reuters, adding that he got to know McCollum during visits for dinner at their house. "He's a defender. He loved his country and wanted to make a difference."

Navy medic Max Soviak's sister Marilyn described him as only a sibling could.

"My beautiful, intelligent, beat-to-the-sound of his own drum, annoying, charming baby brother was killed yesterday helping to save lives," she wrote on Instagram

Pictures on Max Soviak's Instagram page show him laughing on the beach, rock-climbing, skiing and posing with two young children. "Not just an older brother, I'm the cool older brother," Soviak wrote in 2019.

"It's kill or be killed, definitely trynna be on the kill side," Soviak wrote on June 10.

The accompanying photo appeared to show him alongside two other troops in uniform holding weapons.

Hunter Lopez, 22, another Marine killed in the blast, was the son of a captain and a deputy in the Riverside County, California, sheriff's office, according to a Facebook post by Sheriff Chad Bianco. Lopez had planned on following in his parents' footsteps and becoming a deputy when he returned home, the post said.

"I am unbelievably saddened and heartbroken for the Lopez family as they grieve over the loss of their American Hero," Bianco wrote in a different post on his personal Facebook page.

The explosion also took the life of Staff Sergeant Taylor Hoover from Utah, according to a Facebook post by his aunt, Brittany Jones Barnett. She and other relatives described him on social media as brave and kind.

"The world has lost a true light. Our hearts are broken. Shock, disbelief, horror, sadness, sorrow, anger and grief," she wrote.

The father of Lance Corporal Jared Schmitz, 20 called into a local radio station in Missouri on Friday to speak about his son's death and his passion for military service.

"He was not the type that liked to just sit around and get his four years done and walk away," Mark Schmitz told KMOX. "He wanted to be in a situation where he actually made a difference."

Schmitz said his son had been stationed in Jordan before being called to Afghanistan two weeks before the attack.

The last publicly visible post on Jared Schmitz's Facebook page was a July 29 photograph of him at the archeological site of Petra, in Jordan. A friend commented that he hoped Schmitz was staying safe, to which Schmitz replied, "always my guy".