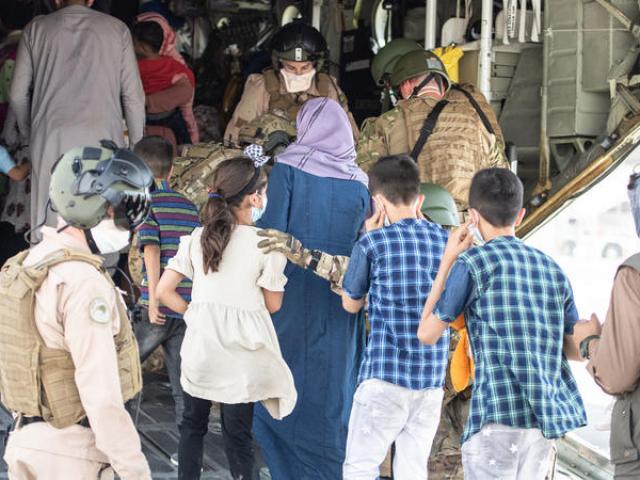 Many Afghan refugees to arrive with only the clothes on their back.

Steve Nikoui had been glued to TV reports on Thursday, desperate for hints his son, Lance Corporal Kareem Nikoui, survived the deadly airport suicide bombing in Afghanistan when three Marines...

The United States have signed a deal with Taliban insurgents that could pave the way toward a full withdrawal of foreign soldiers from Afghanistan and represent a step toward ending the 18-year-war in the nation.

A suicide bomber killed 63 people and wounded 182 in an attack on a packed wedding reception in the Afghan capital on Saturday night, the interior ministry said, as violence shows no sign of easing...

Afghans have begun voting in parliamentary elections overshadowed by chaotic organisation, allegations of corruption and violence that has forced a postponement of the vote in the strategic southern province of Kandahar.

A suicide bomber blew himself up outside a voter registration centre in the Afghan capital Kabul on Sunday, killing at least 30 people and wounding dozens as they waited to receive identity cards,...

Auckland's Muslim community is mourning one of their own, who was killed in a bomb blast in Afghanistan.

The US has put more pressure on Pakistan to help it with the war in Afghanistan, suggesting it could downgrade Islamabad's status as a major non-NATO ally.

President Donald Trump opened the door to an increase in US troops in Afghanistan as part of a retooled strategy for the region.

Insurgents have attacked a village in the northern Afghan province of Sar-e Pul, killing as many as 50 people, including women and children.

The head of Islamic State in Afghanistan, Abu Sayed, was killed in a strike on the group's headquarters in Kunar province earlier this week, the Pentagon said.

Two Afghan girls refused visas to the United States for a robot-building competition said they were mystified by the decision, as the contest's organisers said teams from Iran and Sudan as well as a de facto Syrian team had gained visas.

A series of blasts in Kabul killed at least six people at a funeral for one of the victims of clashes between police and protesters a day before.

At least nine people were killed and more than 90 wounded were taken to Kabul hospitals after a huge car bomb exploded in the Afghan capital, a public health official said, and the casualty total could rise.
Britain's Prime Minister David Cameron rambled a bit on his visit to Afghanistan last December, but ended up sounding just as deluded as United States President George W. Bush had been when he proclaimed ''Mission accomplished'' six weeks after the invasion of Iraq.
Nothing about recently announced Afghan peace talks points to an easy or a quick resolution, despite each party involved in the process putting on a brave face.

New Zealanders and other Western countries have during the past few years increasingly questioned their military role in Afghanistan.

Eleven children and a woman were killed by an air strike during a NATO operation targeting Taliban commanders in eastern Afghanistan, officials in the region say.

Nine Taliban suicide bombers have killed themselves and 44 others in an attack on a courtroom in western Afghanistan where 10 of their comrades were on trial, a local official said.