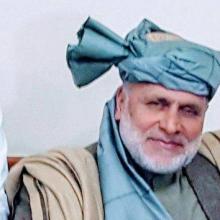 Hashem Slaimankhel. Photo: Supplied/NZ Herald
Auckland's Muslim community is mourning one of their own, who was killed in a bomb blast in Afghanistan.

Hashem Slaimankhel was caught up in a Taliban attack in the Afghan capital of Kabul, which killed at least 95 people, and injured 158.

Slaimankhel was an elder of the New Zealand Muslim Association's Shura Committee and chairman of the UMMA Trust.

He said a ceremony was currently being held at Slaimankhel's brothers house, and there will also be prayers for him in the mosque.

About 250 to 300 members of the community had gathered at the house and Slaimankhel's family was due to fly to Afghanistan tonight.
Slaimankhel travelled to Afghanistan with his daughter-in-law, who is understood to be safe.

Slaimankhel arrived in New Zealand in 1998 after qualifying as a doctor in Pakistan, according to government organisation Refugee Health. He worked for the Auckland DHB as a refugee health worker and in 2011 his work around helping the community consider family violence issues was recognised by the New Zealand Police, Settling In and the Auckland Council.

The Ministry of Foreign Affairs and Trade said it was aware of the death of a New Zealand citizen in a terrorist incident in Afghanistan and was in contact with the person's family.

MFAT would not provide further details due to privacy reasons.

US President Donald Trump has condemned the Taliban suicide bombing.

"I condemn the despicable car bombing attack in Kabul today that has left scores of innocent civilians dead and hundreds injured," Trump said in a statement.

"This murderous attack renews our resolve and that of our Afghan partners," he said.

"The Taliban's cruelty will not prevail."

Trump called on countries to "take decisive action against the Taliban and the terrorist infrastructure that supports them".

The bomb was hidden in an ambulance when it blew up at a police checkpoint in a busy part of the city that was crowded with pedestrians.

The Taliban claimed responsibility for the blast, a week after they claimed an attack on the Intercontinental Hotel in which more than 20 people were killed.

US Secretary of State Rex Tillerson said the Taliban's use of an ambulance as a weapon to target civilians in a bombing in Afghanistan's capital "represents inhumane disregard for the people of Afghanistan".

Tillerson said the ambulance attack is "a violation of the most basic international norms".