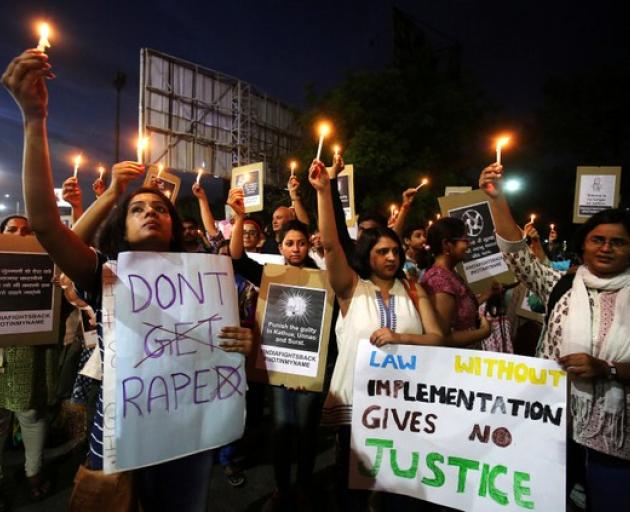 Women hold candles as they shout slogans during a protest against the rape of a ten-year-old girl, in the outskirts of Delhi. Photo: Reuters

India is the world's most dangerous country for women due to the high risk of sexual violence and being forced into slave labour, according to a poll of global experts released on Tuesday.

War-torn Afghanistan and Syria ranked second and third in the Thomson Reuters Foundation survey of about 550 experts on women's issues, followed by Somalia and Saudi Arabia.

The only Western nation in the top 10 was the United States, which ranked joint third when respondents were asked where women were most at risk of sexual violence, harassment and being coerced into sex.

The poll was a repeat of a survey in 2011 that found experts saw Afghanistan, Democratic Republic of Congo, Pakistan, India, and Somalia as the most dangerous countries for women.

Experts said India moving to the top of poll showed not enough was being done to tackle the danger women faced, more than five years after the rape and murder of a student on a bus in Delhi made violence against women a national priority.

A graphic of the top 10 most dangerous countries for women according to an international poll. Photo: Thomson Reuters

"The (world's) fastest growing economy and leader in space and technology is shamed for violence committed against women."

Government data shows reported cases of crime against women rose by 83% between 2007 and 2016, when there were four cases of rape reported every hour.

The survey asked respondents which five of the 193 United Nations member states they thought were most dangerous for women and which country was worst in terms of healthcare, economic resources, cultural or traditional practices, sexual violence and harassment, non-sexual violence and human trafficking.

Respondents also ranked India the most dangerous country for women in terms of human trafficking, including sex slavery and domestic servitude, and for customary practices such as forced marriage, stoning and female infanticide.

India's Ministry of Women and Child Development declined to comment on the survey results.

Afghanistan fared worst in four of the seven questions, with concerns over healthcare and conflict-related violence.

"The ongoing war and conflict are getting worse in Afghanistan, which puts the lives of women and girls at increasing risk," said US-based Otis, a survey participant.

Afghanistan's Public Health Minister Ferozuddin Feroz said the deteriorating security situation was making life difficult for women, with large parts of the country still in the control of Taliban fighters after nearly 17 years of war.

"Nowadays, suicide bombings and armed conflict is the third (highest) cause of deaths and disability in Afghanistan," he told the Thomson Reuters Foundation in an interview in London.

"Instead of focusing (spending) on maternal health, on nutritional status, we spend it on trauma."

The impact of a seven-year war drove Syria into third place in the survey, amid concerns over access to healthcare and both sexual and non-sexual violence.

Afghanistan fared worst in four of the seven questions, with concerns over healthcare and conflict-related violence. Photo: Reuters

"There are so many dangers for girls and women," said Maria Al Abdeh, executive director of Women Now For Development, which supports women's centres in Syria.

"There is sexual violence by government forces. Domestic violence and child marriage are increasing and more women are dying in childbirth. The tragedy is nowhere near an end."

Somalia, where more than two decades of war has fuelled a culture of violence and weakened institutions meant to uphold the law, was again named as one of the five most dangerous countries for women.

Saudi Arabia ranked fifth, with women's rights experts saying there had been some progress in recent years, but the recent arrests of female activists ahead of the lifting of a ban on women driving showed much more needed to be done.

"One of the worst laws that prevent women from having equal opportunities is guardianship - because every woman is subjected to a male guardian. She cannot get a passport, cannot travel, sometimes she cannot work," said Ahlam Akram, founder of BASIRA (British Arabs Supporting Universal Women's Rights) in the UK.

"We need to completely obliterate this system. I think change is coming, but it takes time."

A protester raises a placard reading "#MeToo" during a rally against harassment in Tokyo. Photo: Reuters

Experts said the surprise addition of the United States in the top 10 most dangerous countries for women came down to the #MeToo and Time's Up campaigns against sexual harassment and violence that have dominated headlines for months.

"We are going to look back and see this as a very powerful tipping point ... We're blowing the lid off and saying '#Metoo and Time's Up'."

Rounding out the top 10 most dangerous countries for women were Pakistan, Democratic Republic of Congo, Yemen and Nigeria.

India, Libya and Myanmar were considered the world's most dangerous nations for women exploited by human traffickers in a global crime worth an estimated $150 billion a year.

"In many countries the simple fact of being female creates a heightened risk of becoming a victim of slavery," said Nick Grono, chief executive of the Freedom Fund, the first private donor fund dedicated to ending slavery.

The poll of 548 people was conducted online, by phone and in person between March 26 and May 4 with an even spread across Europe, Africa, the Americas, South East Asia, South Asia and the Pacific.

10 most dangerous countries for women 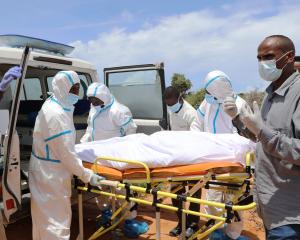