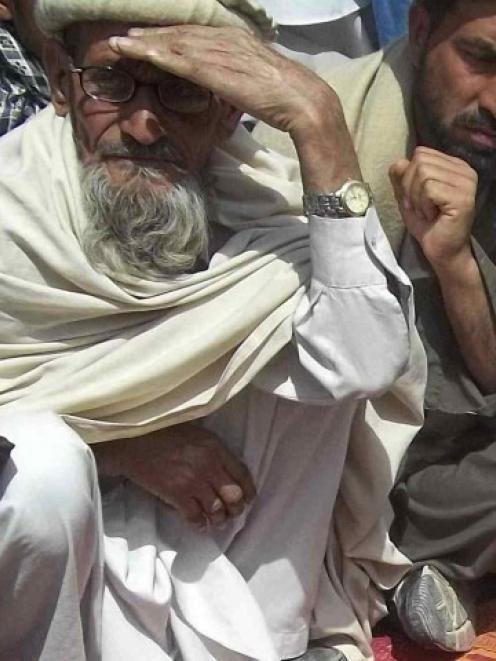 Afghan villagers sit near the bodies of children they say were killed during a NATO air strike in Kunar province. REUTERS/Stringer
Eleven children and a woman were killed by an air strike during a NATO operation targeting Taliban commanders in eastern Afghanistan, officials in the region say.

Civilian deaths have been a long-running source of friction between Afghan President Hamid Karzai and his international backers. Karzai has forbidden Afghan troops from calling for air strikes and NATO advise crews not to fire at or bomb in populated areas.

Six insurgents - two of them senior Taliban leaders - were killed during the operation in a village in Shigal district in Kunar province, which is on the Pakistani border, on Saturday, the Interior Ministry said in a statement.

The Interior Ministry did not mention any civilian casualties but Wasefullah Wasefi, a spokesman for the provincial governor, said civilian homes had been hit during an air attack.

"Eleven children and a woman were killed when an air strike hit their houses," Wasefi said.

The deaths came on the same day that a car bomb killed five Americans, including three U.S. soldiers, a young diplomat and a U.S. Defence Department contractor, in the southern province of Zabul.

Mohammad Zahir Safai, the Shigal district chief, said the woman and the children were killed when the houses collapsed on them.

A spokesman for the NATO-led International Security Assistance Force (ISAF), Captain Luca Carniel, said they were aware of reports of civilian casualties and was assessing the incident.

Carniel said ISAF had provided "air support" during the operation but he said there had been no ISAF troops on the ground. The air strike had been requested by coalition forces, not their Afghan allies, he said.

A Reuters journalist saw bodies of 11 children when they were taken to Safai's office in protest by their families and other villagers on Sunday.

The journalist did not see the body of a women and Safai said residents told him of the death. Women's bodies are not displayed, according to custom.

Wasefi also said an American civilian adviser to the Afghan intelligence agency, the National Directorate of Security, had also been killed in the operation. He said it had lasted several hours.