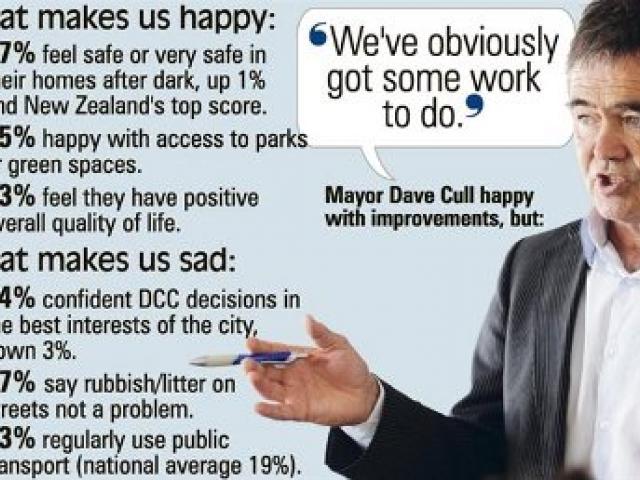 Dunedin residents feel safer in their homes at night than people living in any other major New Zealand city, according to the latest Quality of Life survey.

The AA says drivers must be extra vigilant near schools when children return to school this week.
The Queenstown Lakes District Council says despite the alleged assault of a community guide in the weekend - the second such incident in three months - the guides are well placed to deal with the risks they face.

Lives could be put at risk after "mindless vandals" damaged a newly installed life-saving device in an area known for fatalities, police say.

The Dunedin City Council is reviewing its policy on dangerous, insanitary and earthquake-prone buildings, with a view to increased protection of the city's assets.
Safety work continues on a partially collapsed building in Rattray St, central Dunedin.

Weather forecasting is an increasingly sophisticated science but because weather systems are constantly evolving any snapshot, taken in isolation, renders it inexact.
Continuous heavy rain and a forecast for more led Meridian Energy to spill from Lake Tekapo yesterday.
Punters wanting to test-tip the redesigned Lake Wanaka pontoon will have their chance to try to capsize the popular swimming platform in a council-controlled operation.

The effect of declaring most of Dunedin's flat land at risk of liquefaction has caught out another home buyer trying to get insurance, and real estate industry figures are warning of an overreaction to a problem they say has been blown out of proportion.
Fireworks are on sale from today, prompting a reminder from emergency services about public safety.

Constable Jonathan Pearce (right), of the Dunedin Strategic Traffic Unit, was in Lawrence yesterday encouraging drivers to stop their journeys for rest and refreshments.

Newly-elected Dunedin city councillor Lee Vandervis has criticised Energy Safety for failing to fully investigate damage to an 11,000-volt power cable in Mosgiel.
While the ski season is nearly over, people in the mountains still need to be aware of avalanche risks, specialist Andrew Hobman warned yesterday.
Energy Safety - part of the Ministry of Economic Development - has launched a preliminary investigation into the damage to a high-voltage power cable in Dunedin last week.

More research is needed on two Taieri fault-lines to determine if they are active, University of Otago geologist Prof Richard Norris says.

Home is where the danger is, Accident Compensation Corporation (ACC) statistics reveal, having shown 30 Otago people died as a result of accidents in their homes last year.

Taieri farmer wants TrustPower to audit its transmission lines after eight of his dairy cows were electrocuted when a 33kV line taking electricity from the Waipori Dam dropped across his farm.
Dunedin police are urging people to be aware of their personal safety after an attack on a female student last night.

Dunedin police are paying for buses to try to stop partying Gardens Tavern patrons disturbing other residents in the North Dunedin student area this weekend.