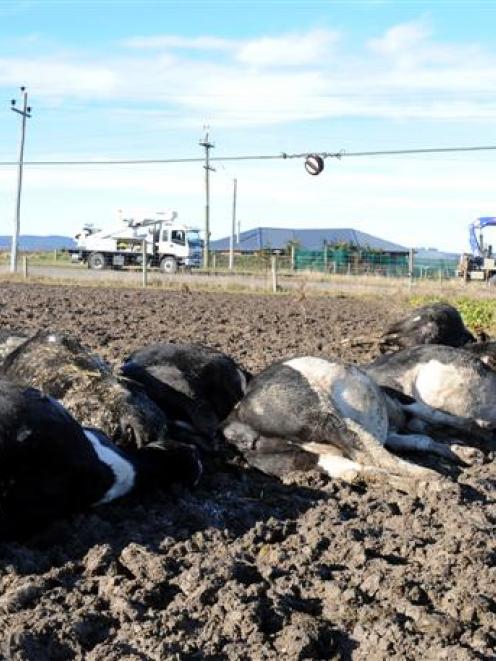 In the hour after his cows were killed yesterday morning, Alistair Kerr said he wanted the electricity generator to do all it could to make sure his staff, animals and property were safe.

"Is this why we pay our lines charges?" Mr Kerr asked, turning to his dead cows, at least one with a severe flesh burn across its back, lying below the drooping power line.

"They have their lines on other people's land.

"They should be doing all they can to make sure nothing like this happens.

"Making sure everything is safe is the least they can do."

The cows were among 80 in the Maungatua Rd wintering paddock when a farm worker noticed the line was down about 11am.

He was beaten there by the ill-fated eight cows.

The line was less than 2m from the ground - within "licking distance".

Four of the cows died instantly, the other four from suspected heart attacks, Mr Kerr said.

A broken insulator, part of which was still dangling above the corpses, had cost his farm many thousands of dollars.

"We've fed them through winter, we've got them through, and we'll not get anything like them to replace them, not now."

TrustPower's Graeme Purches said the line tripped at 11.03am and contractor Delta was on site by 11.30am.

Investigations confirmed the insulator "failed" when heavy frost split a crack somewhere on the porcelain body.

Such failures were rare.

The lines were checked every year, or after a fault, but such weather-prone cracks were not easily spotted.

A full audit would require the line to be shut down while each insulator was checked.

Such an audit appeared unlikely.

When asked about reparation, Mr Purches said there would be discussions with insurers in coming days.