Beach rescues up on last season 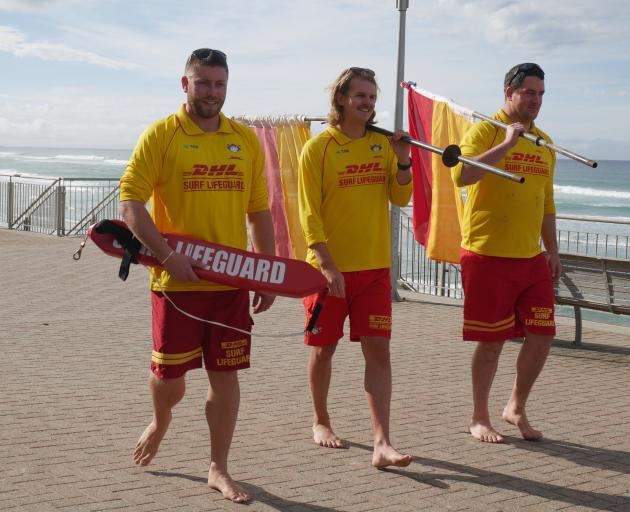 Surf lifeguards (from left) Cam Third, of St Kilda Surf Life Saving Club, Otago-Southland club development officer Felix Cook, and Matt Bradley, of St Clair Surf Life Saving Club, collect the flags and rescue tube to mark the end of the patrol season. During the 2020-2021 season, there were 42 rescues, more than double than in the previous season. Photo: Jessica Wilson
After nearly 4400 hours patrolling Dunedin’s beaches, lifeguards are putting the flags away.

An assist is when a person requires assistance to return to shore but would most likely be able to get themselves out of danger.

Not knowing the conditions or being able to identify risks was most likely the cause of people needing rescue, Mr Cook said.

Mr Cook put the increase in rescues this season down to more people spending time at the beach due to the Covid-19 pandemic.

People were unable to travel overseas so bought water-based equipment, such as jet skis and stand-up paddle boards.

There were five major first aid incidents, 15 minor ones and 12 searches.

Mr Cook encouraged people to be safe in the water if they were going to swim while the beaches were not patrolled.

It was important to swim at beaches with a surf club, so if they did get into trouble they were more likely to be rescued.

And, if they saw someone in trouble in the water, to call 111.