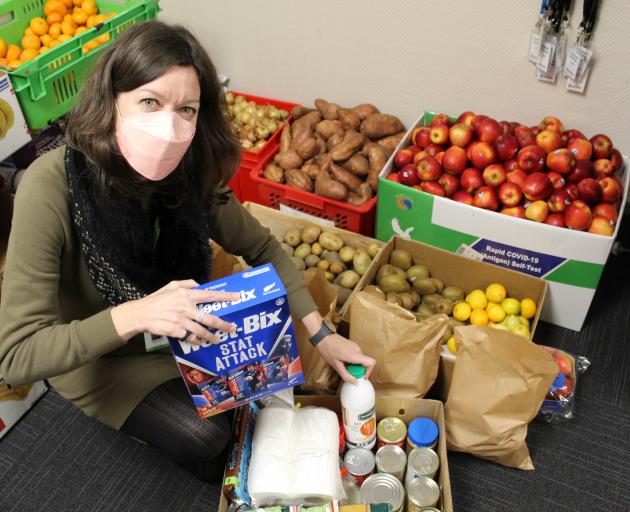 Social Worker Sarah Davis finishes loading a box of food at Presbyterian Support Otago Family Works foodbank. PHOTO: SIMON HENDERSON
Dunedin’s major food banks are feeling the pinch, with demand at an "all time high" due to the rising cost of rent, food, and fuel, sparking concerns about a new kind of poverty in New Zealand.

The Salvation Army, Presbyterian Support Otago (PSO), and Mosgiel foodbanks all report a huge increase in working people finding themselves unable to meet basic costs, and having to turn to food banks for help.

They also say people seeking help are spending at least 60-80% of their income on basic costs, leaving little or no money for food.

"Many people now accessing our foodbank are working people, because they are finding they are not able to meet basic costs," Ms Gelling said.

PSO also continued to see people struggling on benefits, including superannuitants, and people impacted by Covid-19 — especially those who now had reduced working hours.

Salvation Army Dunedin City Corps officer David McEwen said the rising numbers of working people needing not only food but other wrap-around services was indicative of a new kind of poverty.

"Most of the people are really hurting," he said.

"Many have not had to resort to foodbanks before and are unsure how the process works."

Some had reduced wages due to reduced hours, rent was a huge drain on people’s incomes, and increasing mortgage payments were not helping.

Mr McEwen estimated families were spending about 80% of their income on the basics, meaning there was less available for discretionary spending.

Mosgiel Foodbank co-ordinator Michelle Kerr said demand for food was at an "all time high", with these school holidays the busiest in all the years she had been at the foodbank.

"The cost of rent, food, and fuel is affecting everyone — they are playing a huge part in why people are struggling," she said.

Extra costs like doctors and pharmacies were also hard for people who had to push food aside to pay these bills, she said.

Ms Gelling said, in the past, people might have accessed foodbanks from time to time due to sudden unexpected costs.

"But now many people are struggling to afford food week to week, even without unexpected expenses, because the cost of living had skyrocketed."

The Winter Energy payment was helpful, but because other costs were so high, the payment was often needed for basics, meaning people were unable to put it aside to cover the power bill at the end of the month.

Ms Kerr said some of her clients were living in their cars, having been unable to find affordable rentals, while others lived in fear of being evicted if they complained to landlords about sub-standard housing.

"Our communities are entitled to have basic food and housing securities, but sadly there is not much of this these days."

Ms Gelling said there was also increasing use of Afterpay and credit/revolving credit options to cover basic living costs, such as fuel and petrol.

"Although initially people think they can pay this off, once into this type of credit cycle for basic needs, the high interest and compounding use of credit to make ends meet becomes unmanageable long term, causing significant distress."

She said there were affordable options, such as low- or no-interest Good Loans for items such as secondhand care, repairs, computers, appliances, education costs, and medical/dental services.

The organisation would like to see better regulation of Afterpay, removing GST on fruit and vegetables, measures to allow better competition among supermarkets, planning measures to increase housing, more community gardens, and free public transport.

Mr McEwen said these were very tough times and, for some, "the light at the end of the tunnel is a train coming towards them".

"New Zealanders are a tough breed and to get through this we need, and can, work together," he said.

Supplies most needed by foodbanks

Toiletries including deodorant and shampoo