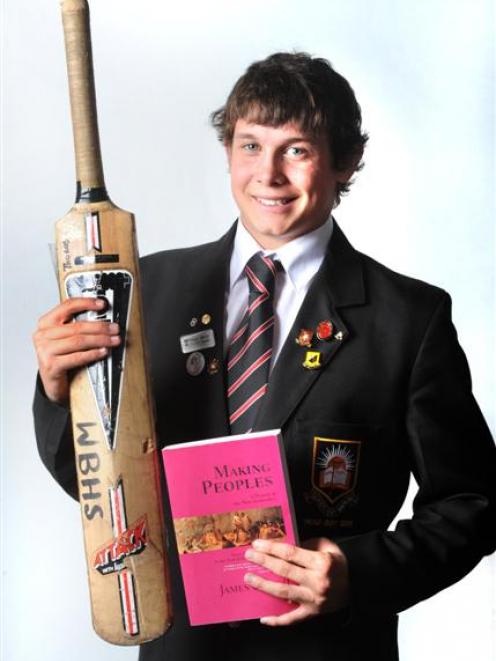 Jordan Horrell
The diversity of personalities and talent involved in cricket make it the sport of choice for Jordan Horrell.

The 17-year-old Waitaki Boys High School head boy started playing when he was 8 years old and has not looked back.

A bowler, Jordan has a string of cricketing achievements to his name.

He also managed to find the time to play for the North Otago senior men's Hawke Cup team.

This year he continued playing for that team, also captaining the school team again and representing Otago.

Playing for Otago and the North Otago men's team were both achievements of which Jordan is especially proud, along with becoming head boy.

He appreciates ‘‘how diverse all the personalities are in cricket and how it's not just the outstanding athletes who are good at it''.

Despite all his sporting success, he still manages to hold his own in the classroom.

In both 2007 and 2008 he was named one of the top 12 scholars for his year level, and his passion for history resulted in his winning the history prize both those years.

A highlight for Jordan was travelling to Switzerland for three weeks as part of a school geography trip.

The group spent most of the time looking at ‘‘touristy stuff'' and he ‘‘loved it''.

Role model: Stephen Fleming, because he was ‘‘always calm under pressure, intelligent, a thinker, and student of the game''.

Hopes for the future: To become a teacher of history and English. To obtain a bachelor of arts in history and English from the University of Otago, then complete a teaching qualification. Teaching overseas and playing a season of cricket in England also appeal.