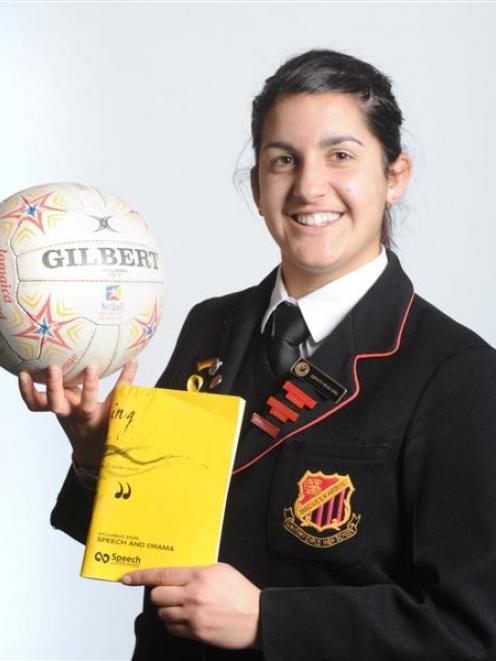 The 17-year-old is deputy head girl of Waitaki Girls High School, an achievement she is very proud of.

‘‘I quite like helping people so being in a position like this I'm able to reach a lot of people,'' she said.

Her other passions, speech and drama, also allow her to reach a wide audience.

She began learning the subjects in year 9 and likes knowing she can stand up in front of any audience and ‘‘wing something''.

The confidence the skill gave her and the ability to give other people enjoyment are two key reasons she loves it.

After completing her grade eight speech exams with honours, she is now studying towards her ATCL (Associate of Trinity College London) which will allow her to become a speech teacher.

While being a competent swimmer and athlete, Jane has also played netball since she was 9 and is now ‘‘giving back'' by coaching a junior team.

One of her greatest challenges was taking part in a ‘‘very rewarding'' Outward Bound course last December.

She flourishes by being challenged every day and overcoming those challenges.

When she is not studying or playing sport, Jane likes helping out on her parents' farm in Glenavy and being outside.

She holds executive duties as a Waitaki District Youth Council member, the student council chairwoman and as a member of the school social committee and Amnesty International.

Jane likes nothing more than ‘‘organising lots of different things'' which will suit her well in her chosen career path as a primary school teacher.

Role model: Her mother. ‘‘She gives me good advice and is always supportive of whatever I do.''

Hopes for the future: To become a primary school teacher. She wants to study at either the University of Otago or Canterbury University.