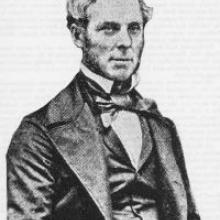 William Mason
The polling for the first Mayor of Dunedin took place yesterday.

Throughout the day, there was a good deal of excitement in the city - indeed, a commercial authority declares that the election and the arrival of the English Mail, jointly, almost put a stop to business; but not nearly so many of those entitled to vote took the trouble to record their votes, as would naturally have been expected from the interest, which has been manifested throughout the week.

Hand-bills, instructing the electors how to "vote for the right man," were plentiful; the how to do it consisting of making a cross against Mr Mason's name, the placard being partly an imitation of the voting paper, and having a large cross in "the right place." Mr Paterson's committee placarded that he was "the only independent Otago candidate;" that that gentleman had "no connection with contractors;" and that voting for him would be supporting "honest independence." Mr Wilson was announced as "the only popular candidate," and as being the supporter of "town improvements," "liberal measures," a "reform council," and "loans for permanent works." About seven o'clock the result of the voting was unofficially made known as follows:-William Mason 495; James Paterson 398; Joseph A. J.

Mr Cargill gives notice in another column that he will officially declare "the final state of the poll" at noon to-day, at the Fire Brigade buildings, and his declaration will no doubt be that Mr William Mason has been duly elected as the first Mayor of the City of Dunedin.

July 24: The official declaration of the poll was made by Mr E. B. Cargill, the Election Officer, at noon on Saturday. There was only a small number of persons present.

Mr Cargill declared the numbers polled to be as we published them on Saturday.

The MAYOR-ELECT, Mr Mason, who was received with applause, said - Gentlemen, I thank you for the honorable position in which you have placed me, as the first Mayor of the city of Dunedin.

On Monday last, I was "a stranger" amongst you - at the end of the week, I am your Chief Magistrate.

My duty will now be to watch over your interests, and to do, as far lies in my power, the best that can be done to promote them. (Hear, hear.)

I cannot take action until after the first of next month.

On that day, you will be called upon to elect Councillors; and I hope that you will exercise your franchise so as to return men who will support me in carrying out the onerous duties I shall have to perform.

But, although I shall have no power before the 1st of August, depend upon it I am not a man to be idle.

I will make myself master of the office of Mayor; I will possess myself of all the information I possibly can, relative to the city, its resources and its needs; so as to be prepared, as soon as the Council shall meet, to proceed to the regular business of that body.