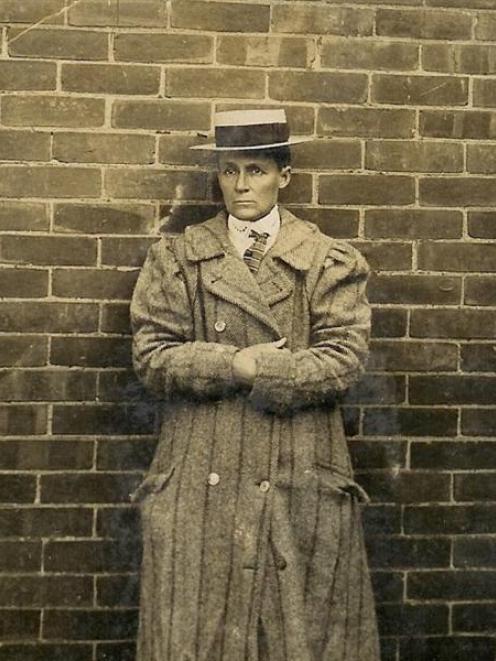 Amy Bock
April, 27: An extraordinary chapter in a most extraordinary career was brought to a close at midday yesterday when Amy Bock, a petite woman of between 48 and 49 years of age, was lodged in the cells at the Dunedin Police Station.

The story of her most recent escapade furnishes more sensation than the average novel, and it has the added charm of being taken from real life and of having been enacted in our very midst.

Amy Bock (to commence the tale at its beginning) was born in Victoria, and, having been unusually well educated, she followed for many years the profession of a teacher in the public schools.

She displayed many talents, notable among them being exceptionable musical ability. But apparently she had that in her character which sooner or later brings one into collision with men's laws, for, in 1884, soon after she came by herself to New Zealand, the police discovered in her a clever criminal.

She was first convicted at Christchurch in 1885, being then found guilty of false pretences, and since that plentifully besprinkled the criminal records of practically every town in the South Island.

During 25 years she has been known to the police here as Channell, Shannon, Vallane, Skevington, and, lastly, as Percy Carol Redwood, her crimes being principally theft and false pretences.

The story with which we have at present to deal commenced early in January of this year, when Amy Bock revisited Dunedin, and obtained a situation under the name of Roy in a Roslyn household.

Using a forged receipt she introduced herself to an unsuspecting business man in Kaikorai Valley, and from him obtained a loan of £30, giving as security her master's furniture.

Then she disappeared, and although since then warrants for her arrest have been floating about the country and the police have assiduously searched for her, nothing further was heard of her until she was arrested in Port Malyneux, 16 miles from Balclutha, on Sunday last.

A few days after Amy Bock disappeared from Roslyn, Percy Carol Redwood presented himself at the door of a boarding-house in York place, and requested to be supplied with accommodation.

He was dressed in a shabby grey suit, and had with him a small quantity of luggage, including a dress basket. He told the landlady that he was a clerk, recently employed in Messrs Sargood's warehouse in Auckland, and that failing health had compelled him to take a holiday.

Then Mr Redwood decided to visit Port Molyneux, where he said his aunt resided.

Mr Redwood took up his quarters at Mrs Ottaway's boarding-house at Port Molyneux, and very quickly became a great favourite with the people at that seaside resort.

With the ladies he was very popular, and it is whispered that a proposal from him would have been welcomed in many quarters.

But he made his advances to Miss Ottaway, a popular young lady, and one well and favourably known throughout the district.

Miss Ottaway, naturally, was not altogether indifferent to him, and when eventually he made a proposal of marriage he was accepted. His bonafides were, of course, demanded, and these were readily forthcoming.

Mrs Ottaway received a letter from Mr Redwood's mother stating that her son had £1500 of his own, that she proposed to give him £1500 as a marriage endowment, £1000 wherewith to purchase house and furniture, and later on there would be something else coming.

Far and near accepted the invitations, and were present on the festive occasion. The bridegroom was Mr Leonard Percival Carol Redwood, third son of the late P. C. Redwood, of Hamilton, Auckland, where the bridegroom's mother now resides.

The ceremony took place in the large drawing-room, and was conducted by the Rev. G. C. Blathwayt, assisted by the Rev. A. M. Dalrymple, M.A. The bride was given away by her father.

For various reasons the bride's parents were by now suspicious of their new son-in-law and all that pertained unto him; but he seemed quite unconcerned.

He displayed remarkable musical ability, and amused himself at the piano during a great part of the evening. When the dance broke up he shared a room with his groomsman, and the latter remarked to his great astonishment that Mr Redwood did not undress, but instead drew pyjamas over his outdoor clothes.

Later in the week a fellow-boarder of Mr Redwood's, from whom the latter had borrowed money, went to the Dunedin Police to express his suspicious about Mr Redwood's bonafides.

As a result Detective Hunt drove to Port Molyneux and called at the boarding-house kept by Mrs Ottaway. He asked if he might see Mr Redwood. Mr Redwood was called, and came down the stairs coolly smoking a pipe.

Detective Hunt and the long-lost and much-wanted Amy Bock were not by any means unknown to each other.

"All right," answered Amy, and one of the most interesting and exciting episodes of her career was concluded.

She was taken to Balclutha that night, and brought to Dunedin by the first express yesterday. She will be brought before the Police Courts.

The warrant on which the prisoner was arrested charges her with about the middle of January obtaining £30 from Arthur Ellis by means of a false pretence.

The accused, it is understood, has made a clean breast to this charge, and also the other charges on which she is liable to be prosecuted. She is anxious to get the whole thing over as soon as possible.