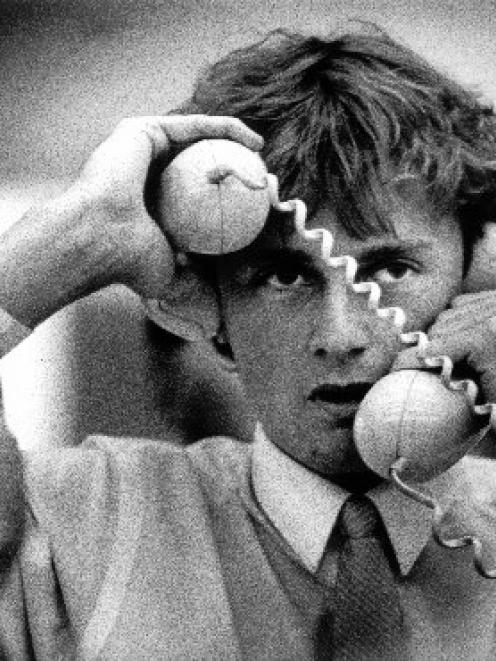 A sharemarket dealer has his hands full during hectic trading at the Auckland Stock Exchange. Photo: The New Zealand Herald
October 20: Sharemarkets around the world have fallen out of bed in the past two trading days, New Zealand following the pattern yesterday by losing 154.68 points on the Barclays industrial index.

Leading stocks such as Brierley and Fletcher Challenge shed more than 20c on their price.

Few listings were spared in the bloodletting, notable for a 32c drop by Robert Jones Investments and a 90c drop by Pacer Pacific, though that one is still worth $12.80.

The fall in the Barclays is only second largest, the loss on May 18 being greater.

Most of it was attributable to selling by individuals.

In Australia, the all-ordinaries index had a record fall of 80 points as that market joined the retreat triggered by the Dow Jones Industrials index's record 108 points loss on Friday.

With the world bull market now five years old there is a certain nervousness about what is to come.

Added to the 154 points lost on Monday the market has, in two days, taken the index back almost to its position on May 18 when everyone thought we had the panic to beat all panics.

New Zealand was caught up in the worldwide torrent of selling, which started on Wall Street two weeks ago and became Niagara on Monday, when the Dow Jones index matched the Barclays drop by losing 504.75 points in one day.

It wiped out all the average gains for the year and left it at its lowest since closing level since April 7, 1986.

The drop far exceeded the 12.82% drop registered on October 28, 1929, the landmark of the Great Depression.

Sharemarkets in Tokyo, Australia and Europe joined in the selling frenzy.

Some shares in Australia had their values halved.

Hong Kong was closed for fear of absolute disorder.

And it looks as though the selling could continue today.

Early trading in London and Paris showed a fresh decline in their indices.

But all eyes are on Wall Street.

The way it acts overnight, so will the rest of the world.

Mr Keith Elsom, a director of Wilson Elsom and Greenslade in Dunedin, expressed sorrow for the losses sustained by the small investors, for they were the sellers yesterday.

He noted that the selling was unrelieved until 11am (when) suddenly, the buying started as wiser heads saw the bargains to be had.

"This doesn't help anybody, except a few opportunists," Mr Elsom said.

"It is not what the stock exchange is about.

As one of the longest serving brokers in the city, he said he had seen nothing like it before.

"Never in my wildest dreams did I expect to see the New Zealand market act so viciously."