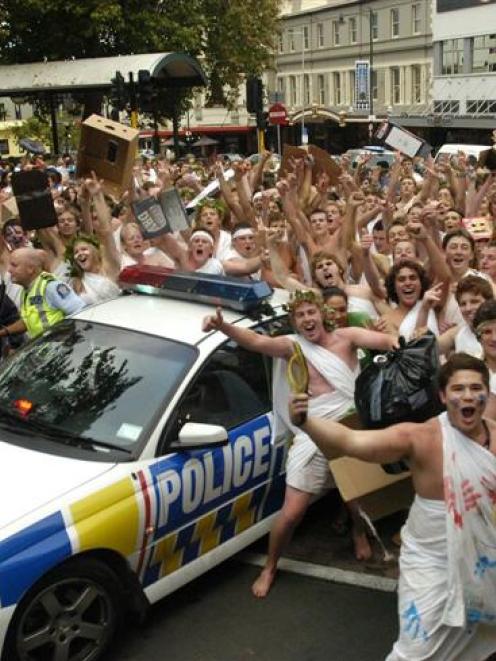 Toga Party chaos in the Octagon in Dunedin. Photo from <i>ODT</i> files.
February 26: The headline above the front-page photograph and report published in The New Zealand Herald yesterday read: "I came, I saw, I chundered".

This newspaper's website was inundated with readers from throughout New Zealand who wanted details on only one story: that of a toga parade which turned ugly. And an overseas tourist asked one of our staff: "Why do you live in a city like this?"

If anyone still doubted that the actions of a few could reflect badly on a city, and an institution, the reaction to events which marred Tuesday's Otago University Students Association toga parade along Dunedin's George St should be telling. Once again, the city and its university made headlines for all the wrong reasons. The only things associated with Dunedin yesterday by people living outside the city were drunkeness, student misbehaviour and disgust.

It is little wonder. After all, it is beyond most people's comprehension that anyone could actually plan to throw buckets of vomit and faeces at participants in the parade. But first-hand witnesses are adamant it happened - and how else can you explain it other than premeditation? How else could such material be collected for that use? It is beyond abhorrent.

Eggs, bottles and rubbish were also thrown. Shop-fronts and car windows were smashed, signs were pulled down, some students had cuts to their feet, arms and faces. All in the city's main street.

Of course, it is easy to stand accused of overplaying such incidents. Yes, it is unfair to lump the blame entirely on "the students". Other people may well be involved. And only a small percentage of tertiary students in the city are involved in such skirmishes.

Students, as we editorialised this week, should be welcomed into Dunedin. They add life to the city, their pranks can add humour, and education is the city's most important "industry". However, few would deny the debacle of Tuesday evening went well beyond mere skylarking.

While those participating in the parade cannot shoulder all the blame - there is no doubt they were pelted with all manner of missiles and unmentionables - one would wonder at the levels of sobriety of many of the marchers, and photographs published yesterday certainly showed that they were not all innocents. At least one participant has blamed second, third and fourth-year students for the disorder.

If that is the case, suitable action should ensue. The University of Otago said yesterday it would send a clear message to those responsible that such behaviour was totally unacceptable, but it was too early to say what form that "message" would take. If we may be so bold, might we suggest the message be a blunt one: "Pack your bags".