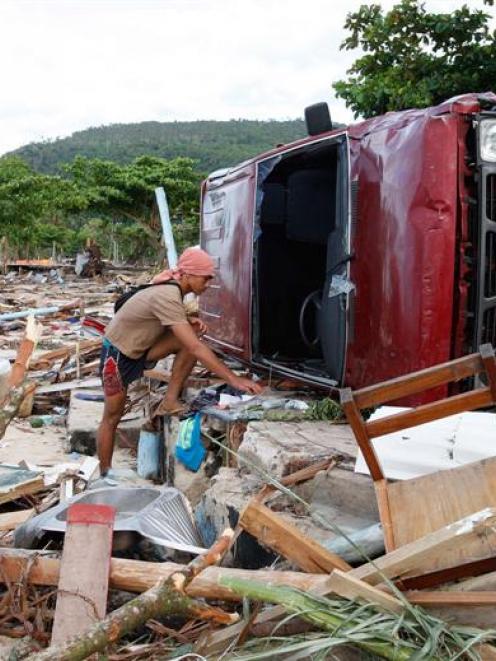 A survivor sorts through debris after a tsunami struck the South East coast villages of Samoa. The death toll rose to 100 following the earthquake that triggered the tsunami. Photo by <i>NZ Herald</i>.
October 1, Apia: The death toll from the towering tsunami that struck Samoa yesterday morning following a powerful Pacific Ocean earthquake is certain to rise as rescuers deal with the devastation left in its wake.

Last night, the fatalities on Samoa and American Samoa had climbed to an estimated 100, including at least one New Zealander and two Australians. Dozens of others were missing and many were injured. Up to 1000 people were thought to have been displaced by the giant waves, which swept in about 20 minutes after the big quake.

Most of the deaths appeared to have occurred on the exposed southern coast of Upolu island in Samoa. The popular resort area was left devastated. As many as 20 villages were thought to have been destroyed. Witnesses described the scene as one of complete annihilation, with villages and tourist resorts alike reduced to rubble by the force of the tsunami.

Cars and people were swept out to sea by the fast-churning water as survivors fled to higher ground, where they remained huddled hours after the quake struck about 6.48am on Tuesday local time (6.48am yesterday New Zealand time).

Samoan Prime Minister Tuilaepa Sailele Malielegaoi was "shocked beyond belief" by the destruction. Looking shaken and distressed, he described it as an "unimaginable" tragedy. "So much has gone. So many people are gone," the Prime Minister said on board a flight from Auckland to the Samoan capital of Apia late yesterday. "I'm so shocked, so saddened by all the loss."

It is understood a large number of the dead are children or elderly, as they could not escape. New Zealand-educated resort owner Anna Tui Annandale - one of Samoa's richest women - drowned trying to rescue children, Samoa's deputy prime minister, Misa Telefoni, said.

Throughout the island nation, signs of the disaster were everywhere, with a large boat which had been washed ashore lying on the edge of a highway and floodwaters swallowing up cars and homes. The quake, with a magnitude of 8.3 on the Richter scale, struck about 200km from Samoa, which has a population of about 180,000, and about 190km from neighbouring American Samoa, a United States territory of about 65,000 people.