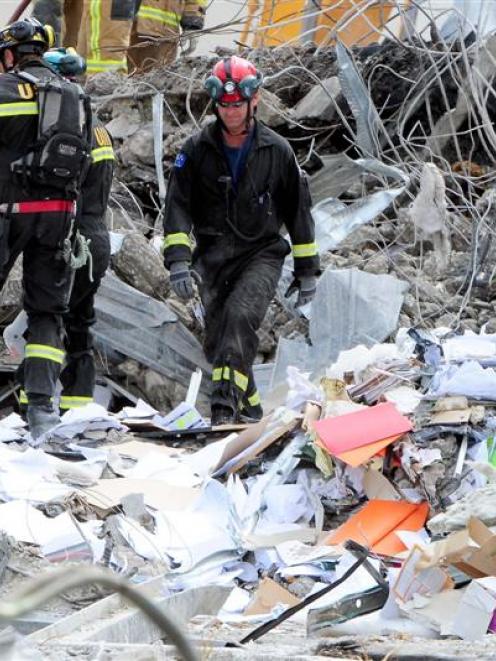 Rescue personnel walk through paper and office items in the remains of the CTV building in Christchurch, in which more than 100 people lost their lives.
February 23, Christchurch: Darkness, rain and temperatures were falling in Christchurch last night, with people still trapped in buildings crumpled by a massive earthquake waiting for search and rescue teams to get them out alive.

Rescuers were to work throughout the night looking for survivors after a 6.3 magnitude earthquake struck yesterday, claiming at least 65 lives, Civil Defence director John Hamilton said.

Emergency services were focusing on high-rise buildings in the central business district, many of which were extensively damaged, police said.

The Pyne Gould Guinness building had tilted at an awkward angle and slumped to the ground, with 30 people thought to be inside, while people were trapped under desks in the Christchurch Press building.

Fatalities had been reported in the Canterbury TV building. The Forsyth Barr Tower had lost its stairs, so those trapped high above ground had to be lifted out by crane. 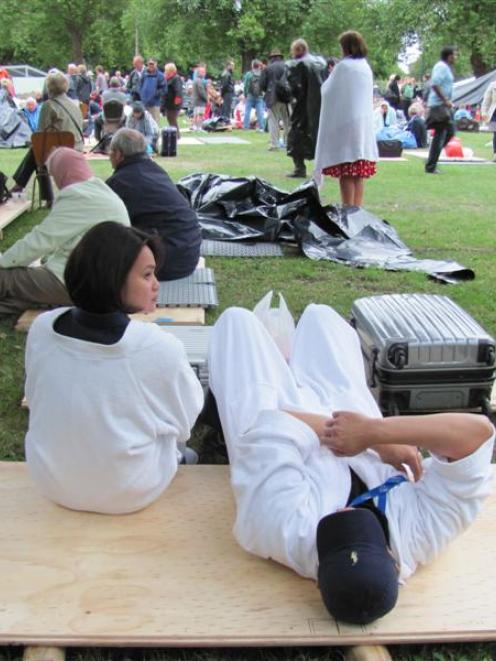 People whose homes were destroyed in the quake settle in to a makeshift evacuation centre at Hagley Park.
People were also feared trapped in hotels, Civil Defence Minister John Carter said.

"What we don't know is whether they were out looking around the town or were in their rooms."

Police said the immediate focus was rescuing people trapped in buildings after the 12.51pm quake.

Around 200 extra staff - some victim identification specialists - were being sent from around the country to Christchurch to help in the rescue effort.

The central city business district had been cordoned off and police were warning people to stay away from the areas within Madras, St Asaph, Montreal and Kilmore Sts.

Rescue teams from New Plymouth, Auckland and Australia were also heading to the disaster zone, Mr Carter said. A woman was rescued from the roof of Pyne Gould Guinness building, where 200 people were working when the quake struck. 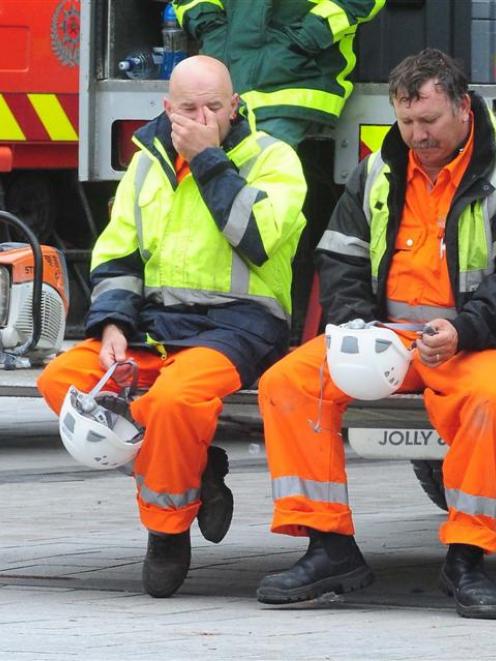 Exhausted search and rescue staff take a break from their work in Cathedral Square. Photos from <i>ODT</i>files/NZPA.
Family yesterday gathered outside in hope their loved ones had escaped with their lives.

The Forsyth Barr building on the corner of Armagh and Colombo Sts was also heavily damaged, with an estimated 150 inside.

About 30 people initially escaped the 13-storey building, the Fire Service said. TV3 said the provincial chambers building had collapsed and people were believed to be trapped inside.

Two people remain trapped in the elegant The Press building on Cathedral Square, after the top three floors of the four-storey building collapsed. Press reporter Martin van Beynen said the mood was still hopeful among families gathered outside the building.

"People are teary eyed and hugging each other," he said.

Young father Tupi Emery said he thought of his loved ones as he awaited rescue in the Canterbury TV building after the quake flattened it.

March 19: They came with straight faces and in their summer attire, for it was a sad occasion on a perfect Canterbury day.

They dressed in red and black, sat in the sandy soil atop Hagley Park in Christchurch, sang along to New Zealand's favourite anthems and prayed for the dead, for the living, and for their city.

Tens of thousands of Cantabrians attended the memorial service at 12.30pm yesterday to honour the estimated 182 people who died in the 6.3-magnitude earthquake on February 22.

June 14: "Every time you think you're about getting back to normal, another big one hits. When will they stop? I'm just over it."

Gayel Marquet, of Christchurch's beachside suburb Sumner, expressed the feelings of a city after more than 50 earthquakes shook the area yesterday, including a brace of big shakes early in the afternoon.

A magnitude-6 earthquake, which struck at 2.20pm about 10km southeast of Christchurch at a depth of 9km, sent stressed residents scrambling about 90 minutes after a 5.5 quake rocked the city.

No-one died in the tremors, in contrast to the 6.3-magnitude quake on February 22, which killed 181 people, but people were injured, buildings collapsed, power was cut to at least 56,000 households and businesses, of which 20,000 were unlikely to be reconnected overnight, and silt from liquefaction bubbled up again.

Some houses were evacuated in Sumner because of falling rocks and at least part of one house fell from a cliff.