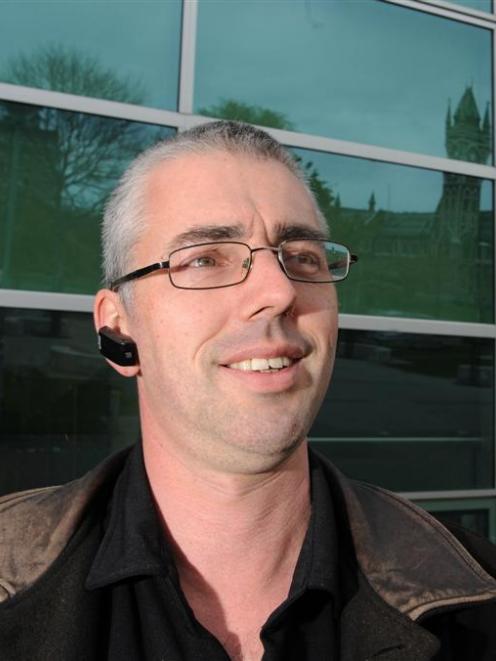 Stuart Fleming. Photo by Peter McIntosh.
Wireless internet company owner Stuart Fleming is quietly confident that his decision to provide massive amounts of free internet to The Distiller will pay dividends for him and Dunedin.

Seven years ago, Mr Fleming started his company, WIC, at the Centre For Innovation in the suite next to where The Distiller now operates.

He recalled to the Otago Daily Times that there was not much of a buzz around the centre. There were a few spin-offs in biotechnology firms operating from the centre.

When he returned to visit The Distiller about two years ago he got excited by the energy coming out of The Lab, the suite which hosts entrepreneurs trying to get their businesses up and running.

"A lot of people get together and despite their differences, they collaborate and exchange ideas.

"To me that is the value of a network - the free exchanges of ideas. It only takes one of those ideas to work."

After the three men explained what they were doing, Mr Fleming agreed to provide a basic deal, believing The Distiller would not use much bandwidth. Then, he sat back and watched.

"After six months, I became more excited about what they were doing and I agreed to give them more capacity."

Twenty terabytes later, Mr Fleming's belief that if businesses had access to unlimited broadband, great things could happen had been realised.

Other New Zealand internet service providers had data caps, a disincentive that stopped people using the internet, he said.

Asked what the benefit was for him, Mr Fleming said he was already working on projects with Mr Calder, one of them following a five-minute conversation in a car park.

"You can't plan for that. It just happened."

The project was installing a webcam which was recording the construction of Forsyth Barr Stadium.

WIC was now providing wireless internet to The Distiller on commercial terms.

A posting on a Facebook page led Mr Fleming to start a project with one of The Lab's residents and he believed further projects would come out of his association with The Distiller.

"You can't predict what is going to be. I have done it because of the bigger benefits that are going to come."

By helping The Distiller, Mr Fleming believed that more Otago University graduates would be encouraged to stay in the city and try out their ideas.

"Some will move on but others will stay. The opportunity to have a few ideas stick can only be positive."