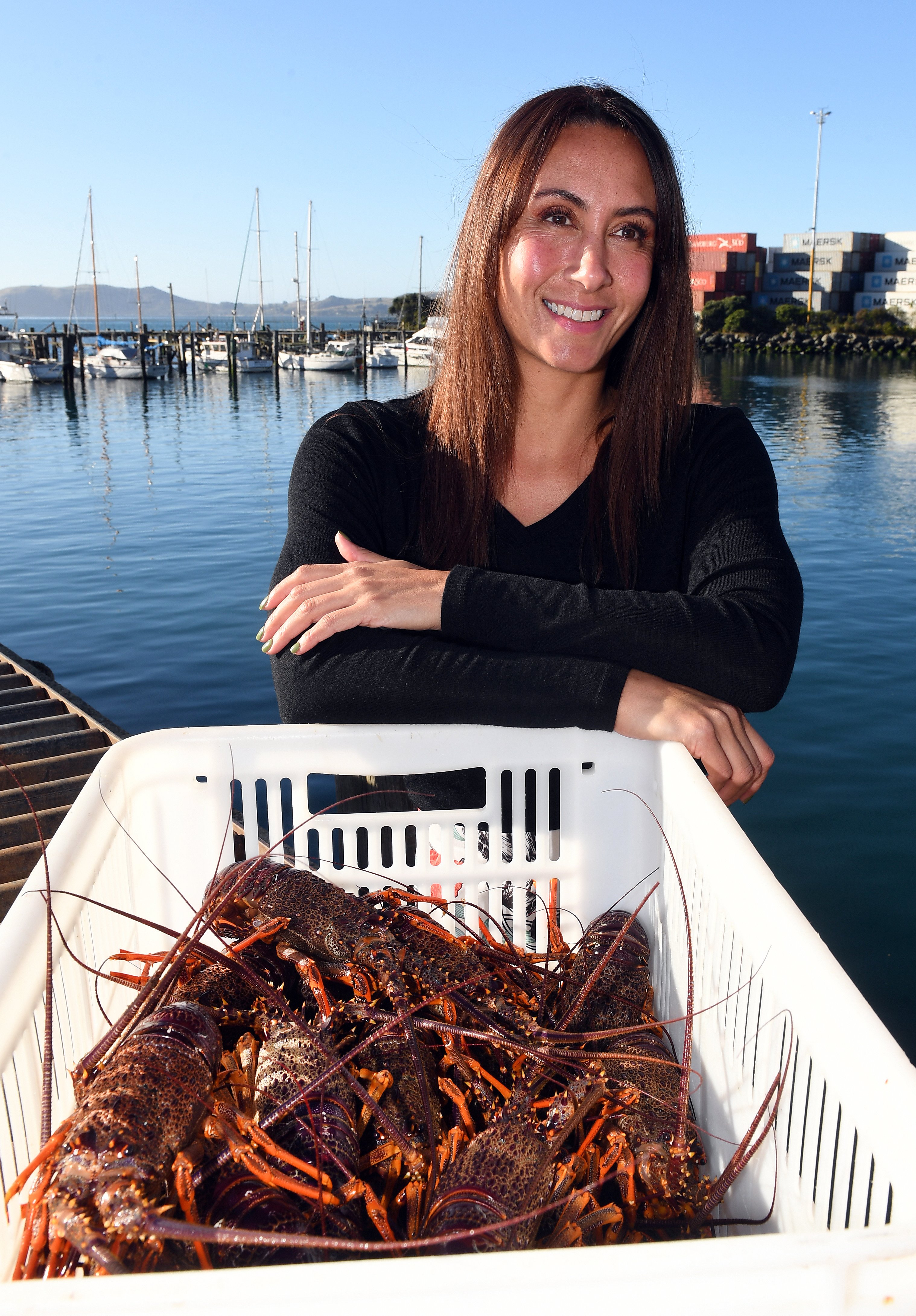 Chanel Gardner is the new executive officer of the Otago Rock Lobster Industry Association. PHOTO: STEPHEN JAQUIERY
The Otago Rock Lobster Industry Association has a new executive officer with Dunedin woman Chanel Gardner officially taking over later this week. Ms Gardner talks to business editor Sally Rae about her passion for the seafood sector and why Otago should be held up as an example.

Chanel Gardner, the new executive officer of the Otago Rock Lobster Industry Association, is a passionate advocate for the seafood sector.

She also has first-hand knowledge of an industry which provides her family’s livelihood.

Ms Gardner said she was keen to help "demystify" the sector to the wider public, believing education about the industry was lacking in New Zealand — "a basic understanding of what’s right at our doorstep" — while also highlighting the good things going on.

Dunedin-born and raised, her love of the sea initially came from diving and living in such close proximity to the ocean. That connection was further cemented through her partner Damon Cooper, a fisherman who also operates successful seafood business Harbour Fish with his brother Aaron.

She initially studied zoology at the University of Otago, and was aiming for a career in marine science, but the arrival of her eldest daughter when she was 21 made her reassess things.

Deciding she "couldn’t have a baby on a boat", she was accepted into law school and she completed double degrees in law and arts, majoring in political science.

After graduating, she practised in Dunedin, focusing mostly on relationship property and civil litigation, until motherhood intervened — she has four daughters aged between 5 and 19 — and she stepped away from legal practice.

In the intervening years, she consulted for Harbour Fish on national policy issues, keeping the business and its fishers abreast of developments in the industry and filing submissions.

When Ms Gardner considered the ORLIA role, she asked herself what value she would add to the organisation, like she did with any role she took on.

She described herself as a good advocate and, it was not just from her legal background perspective, she was passionate about the seafood industry, and she was also good at bringing people together.

She saw a need for engagement and to help grow the understanding in the wider community of the importance of not just fishers but the industry as a whole. The reality was fishers were as concerned, if not more, as the general public about the environment, she said.

There was an abundance of healthy crayfish in the area for customary, recreational and commercial fishers. The rock lobster industry had "fought tooth and nail" to rebuild it "from nothing".

They knew the environment, best practice, how the species worked, where they thrived and what they needed. There could not be a better caretaker of them, and also a port-of-call for decision-makers about fisheries — not just rock lobster but other species and the industry in general.

Yet policy makers and decisions were excluding people who had that first-hand knowledge.

"They may not have a degree or work in Wellington but they know what they are talking about," she said.

That voice was continuing to be discounted. Most laws passed in the last few years had been "kind of shoddy", benefiting lawyers, she said.

Put simply, Ms Gardner said the seafood sector came down to abundance and access. If there was an abundance of fish stocks, then there was access but, if there was nothing to fish, then you could not have access.

It was about working out how to do it fairly "without political posturing and a lot of misguided facts".

Those working in the fishing industry saw what was there and they cared about the sustainability and the environmental impact of everything they did because they wanted longevity of those fish stocks, she said.

Food security was a massive consideration. New Zealand was fortunate it had many great products to export.

There was an abundance both on the land and in the sea — "but people don’t know that", she said.

Instead, they filled the void with chatter they heard on social media and fearmongering.

Otago was fortunate; it was not like the Hauraki Gulf where there could be 20,000 boats on the water every weekend.

There was so much space and healthy fish stocks, it was "such a good snapshot of how a good fishery can be".

There was an opportunity for people to sing from the rooftops about "our little chunk of the world" and continue to work together to keep it that way.

Ms Gardner is also on the board of Southern Inshore Fisheries and she was recently appointed to the Seafood Standards Council. She got the sense often that "anything below Christchurch doesn’t exist", which made it even more important for the local industry to make its voice heard.

It was such an important part of the region and the reason the fishery in the area was so healthy was due to the hard work of those involved in it.

The commercial fishery was so tightly managed, and the restrictions were immense, which had got the fisheries back to where they were now, she said.

She was keen to see children educated about caring for the marine environment, looking after it and knowing where fish came came from. Some children in Otago were lucky enough to go out fishing regularly, but there was much to be enjoyed.

Ms Gardner said it was a tough time in any primary sector, not just fishing. All primary industries were frustrated with changes in laws, regulations and proposals coming through "on top of life".

"People are scared, tired, worried for their kids and future."

Other fishers were doing their best in a very challenging, economic environment and did not have the capacity to read 100-page consultation documents, yet the complexity of policy and legal issues could affect them.

That was why organisations such as ORLIA existed "so they can keep doing what they are doing", Ms Gardner said.

Consumers also needed to advocate to the Government because they would not be able to source fish if there were no fishermen.

Returning to a formal role, Ms Gardner was able to continue being an active parent while "getting that box of professionalism from the back of my brain and bringing it out to the sunshine".

Ms Gardner acknowledged the work of her predecessor Kate Hesson, saying ‘I can’t be Kate 2.0".

"She was so great, she came into that role at such a fundamental time ... she came in cold and blew it out of the park."

She hoped she brought similar skills, in terms of a legal background, analytical mind and attention to detail.

"She’s handing over a healthy and abundant fishery for me to caretake," she said.

Ms Hesson had been outspoken about the consultation process for the South East Marine Protected Areas proposal, describing it as one stage as "turning into a farce".

The Department of Conservation and Fisheries New Zealand sought public feedback on a proposed network of marine protected areas off the southeast coast of Otago.

It was understood advice was being prepared to give to ministers later this year and Ms Gardner hoped lessons had been learned about what needed to be done when consulting with communities.

She was frustrated by the inability to connect with Fisheries Minister David Parker, saying he should be using Otago as a case study, given the great co-operation within the industry and the small population. Having fewer fishers in the area provided an opportunity for connections.

Describing fish as "the superfood of protein", Ms Gardner said there was nothing dearer to a fisherman than getting his fish to the people.

"And if you’re so minded, you can go and catch the bloody thing yourself."

Like meat, favourite cuts of fish were always going to be more expensive "but there are some amazing fish other than blue cod". Price points of protein reflected the costs put on fishers, which eventually had to have flow-on effects.

Commercial fishers might head out to sea — with the rising cost of fuel — and might not catch anything, yet have two or three crew members on board, who all had families.

When it came to the state of the rock lobster industry, Ms Gardner said it had been "knocked around a bit" during Covid-19 and getting product to market but things were looking to improve, as New Zealand opened up more and more flights became available.

It had never been more urgent to get restaurants and tourism back up and running.

"The time for scaremongering is done," she said.

The key was to get people enjoying the country and its produce while "living life a bit more", in a safe way.