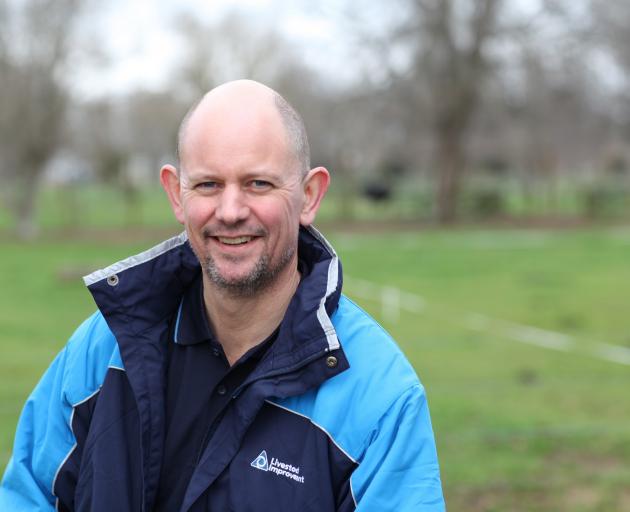 Wayne McNee has left LIC after eight and a-half years as chief executive. PHOTO: LIC
The last time Wayne McNee did not have a job was in 1989 when he was touring around Europe.

As he folded washing in his Auckland home this week on his second day officially without a job, while keeping a watchful eye on his young offspring, Mr McNee admitted it was unusual feeling.

"It’s a choice but it does feel strange," he said.

In June, Mr McNee announced his intention to stand down as chief executive of NZX-listed herd improvement and agri-technology co-operative Livestock Improvement Corporation (LIC) on November 30.

He had been a chief executive for almost 23 years back-to-back without a break between positions, starting at Pharmac in 1998 and ending at LIC.

He might not know what was coming, but one thing he was adamant about was that it was not the end of his career. Merely, it was time to take a break, spend time with his family and think about what was going to come next.

Mr McNee was brought up on a small farm at Enfield in rural North Otago and educated at Enfield Primary School and Waitaki Boys’ High School. His father Neville and grandfather Bob had sawmills in both North and East Otago, and he worked at the mills in his school holidays.

Neville McNee, who now lives in Christchurch with wife Laurelle, was one of North Otago rugby’s great players — a long-serving captain and coach who captained the Old Golds to their greatest moment, beating the Wallabies in 1962. He was also involved in the racing industry and there was "never a dull moment" growing up, his son recalled.

Wayne McNee played rugby at school — "not very well unfortunately" — captained the school chess team for three years and was a prefect in his final year.

He singled out science teacher Stanley Lowe, who died last month, aged 88, for instilling a love of science in him.

"He was a very good teacher," he recalled.

After graduating, he worked at several pharmacies in Christchurch before he and his first wife, who was also a pharmacist, headed to the United Kingdom for seven years.

His father and grandfather had instilled a good work ethic in him and he discovered that New Zealanders in the UK, when they worked hard, tended to "get ahead", he said.

Son Jamie, now 28, was born there and the family returned in 1995 to Dunedin where Mr McNee worked at the hospital pharmacy for about three months.

That same year, Mr McNee got a job at Pharmac, the national pharmaceuticals-buying agency which is responsible for purchasing publicly-funded medicines for New Zealanders, including those prescribed by GPs or administered in hospitals.

He started as therapeutic group manager, then became clinical director, and in 1998 he took over as chief executive. He remained in that role until 2006.

Pharmac "was and is" a very intense place to work, he said. It made very tough and important decisions, on behalf of the New Zealand public, as to what medications would and would not be funded.

There was a lot of conflict, litigation, lobbying and public interest, and Mr McNee said he had a huge amount of respect for what the industry did. Working there felt like you were "making a big difference", he said.

There was a lot of media interest in Pharmac and the public-facing aspect of the role was something he had learned about. That was not something that he missed. When you said you worked at Pharmac — even now — it polarised people, he said.

From there, he went to the Department of the Prime Minister and Cabinet, on level 8 of the Beehive, for an 18-month secondment. Helen Clark was nearing the end of her tenure at that time, and he described her as an "exceptional" prime minister who was great to work for.

Working in the Beehive was quite something — "when you’re in there, it feels like the world rotates around the Beehive".

In late 2007, Mr McNee was approached about taking the role of chief executive of the Ministry of Fisheries. He did not know much about the sector but he was keen to do something different and not go back into health.

There were lots of challenges in the industry, because of the nature of the resource, but it was a fascinating sector to work in and he had enjoyed getting to know the people involved.

He later led the merger of the Ministry of Agriculture and Forestry, the Ministry of Fisheries and the New Zealand Food Safety Authority — " a big piece of work" — to form the Ministry for Primary Industries, of which he was director-general of until 2013.

Having earlier separated from his first wife, Mr McNee married Natalie, — a dairy farmer’s daughter from the Hauraki Plains in the Waikato. The couple have two young daughters, Ella and Hazel.

It was his wife who pointed out that all he did was work; from the Pharmac period onwards, it had been "24/7" and she encouraged him to do something different.

In 2013, he became chief executive of LIC, which he said was still a big role, but very different from working in the public sector. Staying in agriculture had been important to him — he enjoyed working with people in the sector — and it was also "so important to New Zealand".

"Other sectors come and go but agriculture is going to be the engine room of our economy for the foreseeable future, even if the Government thinks it’s a sunset industry from time to time," he said.

Coming from a rural area, Mr McNee had always had an affinity with the land and, perhaps more importantly, an ability to talk to those involved in the story.

When he started at LIC, he did not know much about the co-operative but he did understand its importance, given it bred 75% of New Zealand’s dairy cows and most of its dairy beef.

"It’s the cows that make the milk," he said.

The annual New Zealand Dairy Statistics report, released this week by DairyNZ and LIC, showed total milk volume, total milksolids and per cow production were the highest on record in the 2020-21 season. New Zealand has 4.9million milking cows — down from 4.92million the previous season — and they produced 1.9billion kilograms of milksolids.

Following Mr McNee’s announcement he was intending to step down, LIC chairman Murray King paid tribute to him, saying he had led the organisation through a period of significant growth and development across all areas of the business, while delivering strong shareholder returns.

His successor was recently announced as David Chin, who was previously the co-operative’s general manager operations and service and on its senior leadership team.

fter eight and a-half years at LIC, Mr McNee said it had been a "weird way to finish" as the Covid-19 lockdown in Auckland and travel restrictions meant he had been unable to get back to Hamilton to properly farewell colleagues.

He had "absolutely" enjoyed his tenure with LIC, saying it was a great company with great people who were passionate about what they did.

For him, the thing he probably liked the most was the mix of science and business.

The role had meant he was regularly away from home.

He had been commuting to Hamilton, away for probably three nights most weeks. There was also a lot of offshore travel so lockdown in Auckland meant that the family was finally together.

Mr McNee acknowledged it had been a good career — some of it had come about by planning, some by serendipity, some by being in the right place at the right time.

He believed his work ethic had always stood him in good stead; he had always been prepared to put his hand up. That was something he encouraged those that worked for him, and with him, to do — take opportunities where they could.

He would miss the contact with people as he contemplated his next move. His plan was to spend the next three to four months thinking about what to do next — "and waiting for the right thing to come along".

"I want to make sure it’s the right one for me and the people I’m working with," he said.

He was keen to stay in the agricultural sector, but he was also thinking about health as well as there was a lot that needed to be done in that sector and a lot of leadership opportunities there.

In the meantime, he was just looking forward to hanging out with his family over the summer. And hopefully spending some time at the beach — if Covid-19 allowed.