All about helping SMEs grow 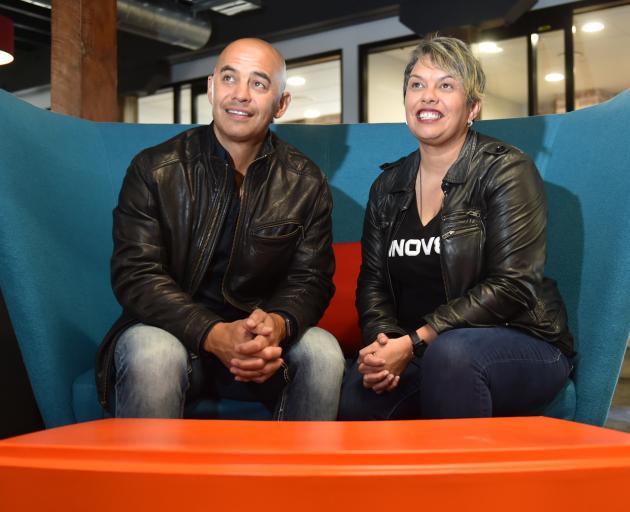 Meet Steven and Heidi Renata — the brother-sister tag team who are helping grow small and medium-size businesses in the lower South Island.

The Milton-born-and-raised siblings are behind Innov8HQ, a business hub and collaborative work space in very funky premises in the heart of Dunedin’s warehouse precinct.

The pair are co-owners of the initiative and recently partnered with BNZ to help grow SMEs in Otago and Southland.

Effectively, Innov8HQ was a "business marae" with the purpose of connecting, resourcing and supporting people, Ms Renata said.

Since leaving South Otago, the siblings had taken very different paths before reuniting in business.

Ms Renata — the "chief energy officer" — joked she was the "chatterbox" at school and always wanted  a career that allowed her to talk.

She left Milton in her late teens and moved to Auckland, a big change for a country girl.

She was working for a finance company, which did not resonate with her personality, when she had a "Hollywood moment".

She was driving past BellSouth  when she decided she was going to work there one day. Within six months, she had a job there. She  worked her way up the ladder,  spending 13 years  with Vodafone, which bought BellSouth’s New Zealand operations in 1998. She was also a life coach.

It was a "fantastic" career in telecommunications and it led to the motivation behind Innov8HQ.

Having been immersed in tech for so many years, she had seen the focus on infrastructure, not so much on people.

She wanted to help both the current and upcoming generation struggling through the tech boom.

She had the dream of creating Innov8HQ in 2015, when she had just turned 40. It was a five-year dream that she and her brother  realised in only 12 months.

Mr Renata was one of the founders of Les Mills International, which took him around the world.

During that time, the company grew from a small start-up to having a presence in more than 100 countries.

He returned to New Zealand about four years ago, and was now based in Auckland, where he was chief executive of media company KIWA Digital. He also had other business and governance interests.

KIWA Digital built native digital apps. Its legacy had been in children’s education and, more recently, it had moved into adult education with cultural intelligence apps.

That included working with Air New Zealand to help with staff training with te reo and tikanga Maori. It also did ADR audio replacement and dubbing.  Netflix was one of its partners.

Through leaving Les Mills, he had some discretionary spending and  had always watched his sister’s career.

His motivation to get involved with her dream was partly drawn by support within their whanau. Many of his family were still in Otago, including his mother who lived in Dunedin, and they were proud Otago people.

From Ngapuhi descent, the siblings were a good example of New Zealand’s biculturalism, he said.

Their father was a direct descendent of Hone Heke, while their mother’s family settled in Otago in the early days of the region’s formation.

Mr Renata completed a marketing degree at the University of Otago and it was great to come back and do something business-related in the city. The "cherry on top" was that it was tech-related.

It was an interesting time in Dunedin, wider New Zealand and globally and tech was "playing some pretty interesting roles" in people’s lives — some good, some not so good.

Innov8HQ was perfectly positioned to approach the future problems of Dunedin and the world; and it would be coming at it from a different approach, much the same as the siblings’ Maori and Pakeha ancestors did, as navigators from continents far away, getting to New Zealand without instruments, he said.

BNZ and Innov8HQ had launched the Konaki business incubator, an initiative designed to grow SMEs across Otago and Southland.

The goal was to create a high-performance network of resilient SMEs with big aspirations and "help them win".

With all the emerging technology, people were "fumbling their way through life and business". It was like business mentoring on steroids, Ms Renata said.

Konaki, Maori for spring up and grow, would focus on enabling people to "spring up".

Over the next 12 months, it would be launched to the SME market,  a sector she believed was under-resourced.

It was also about getting people back to the values underpinning their business, which were often lost when they were "so busy being busy".

The key focus was "not about bums on seats" but about enabling growth of the local economy.

Resilience was " absolutely critical" when it came to running a business, and being able to keep getting back up. It was not all about the successes, but also being able to build a supportive ecosystem, she said.

Innov8HQ’s space and layout went back to marae protocol of hospitality, respect and creativity, which was why the kitchen was at the front, she said.

It set the scene for what people were going to experience and she described it like walking into home.

There was time to be serious, and there was also time to have fun and you had to enjoy the ride, bringing together cool people to make that happen, she said.

Innov8HQ had  been open for 20 months and during that time  13,500 people had been through the space from throughout the world.

The siblings had been asked five times to franchise but that had been put on hold for now. They wanted to get the model "spot on".

The cool part of it all was she never had a bad day at work. There was a great vibe, and also a lot of "cheerleaders" — people wanting to help, and a lot of partnerships presented to them.

There were 26 businesses operating out of Innov8HQ simultaneously and it was open 24/7. It had hosted 83 events.

In New Zealand, about 50% of SMEs fell over in the first five years and there had to be some hard conversations when people got into business, Mr Renata said.

Life could throw some "pretty interesting challenges" and so it was vital to know what was "in the tank" in terms of money, people, support and future clients, to get through the bad times, and  Konaki was an "insurance policy".

Mr Renata was also passionate about hauora, or wellbeing, saying ensuring the founders of a business and staff stayed healthy was underestimated.

That was not just about gym membership, but how to ensure nutrition, exercise and restoration time became part of working life.

"We’ve got to make sure tech doesn’t trap us to the desk," he said.