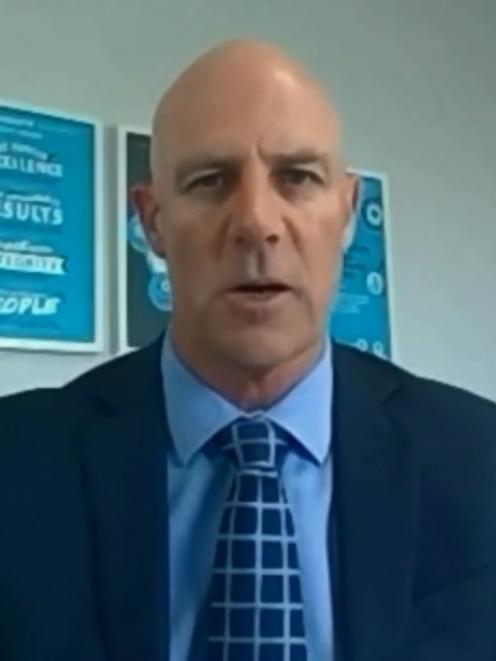 Scott Technology chief executive John Kippenberger addresses shareholders at the company’s online annual meeting. PHOTO: SUPPLIED
An increased drive in automation has resulted in Dunedin’s Scott Technology signing an $A18 million ($NZ18.9 million) deal to design, build and commission an automated beef-boning system — the first of its kind in the world.

The NZX-listed company has partnered with Australian protein producer Teys and Meat & Livestock Australia to develop the system which would improve yield, product quality, throughput and efficiency, while also increasing operator and food safety.

Scott Technology held its annual shareholder meeting online, due to Covid-19 restrictions, this week and chief executive John Kippenberger announced the deal and provided shareholders with an update on the company’s year and outlook.

The Dunedin-designed boning system’s overall return on investment to the processor would be significant, Mr Kippenberger said.

‘‘The use of smart technology will maximise the value of each beef carcass through data and cutting accuracy,” he said.

The system, which would be able to process about 200 carcasses an hour, was expected to be launched by 2023 and would be scalable to service the wider global beef processing industry.

The new contract is the second multimillion-dollar deal the firm has signed with Australian meat companies this year.

In April, it announced a $A10million contract Thomas Food International to design and build lamb-boning system.

It was hoped Scott would be United States’ beef processing market in the next three to five years.

The ongoing issues with the disrupted global supply chain were affecting the firm, generally manifesting themselves in the form of delays for parts.

The company was working to offset the risk by building higher stocks of inventory in more sensitive areas, and some customers were also experiencing delays in building projects, Mr Kippenberger said.

Scott was continuing to closely monitor the Covid-19 situation as Europe entered its fourth wave of the pandemic, and the return to restrictions and potential business disruptions.

Giving an overview of Scott’s performance in the latest financial year, Mr Kippenberger said its revenue was $216.2million, up 16% compared with 2020, despite delays to projects due to the Covid-19 pandemic.

A lower cost structure which had resulted from last year’s ‘‘right-sizing’’ of the business resulted in record earnings before interest, taxes, depreciation, and amortisation (ebitda) for Scott of $22million.