Apple's iPhone 12 Pro and iPhone 12 Pro Max are seen in an illustration released in Cupertino. Photo: Apple Inc./Handout via Reuters
Apple Inc on Tuesday launched its next-generation iPhone 12, with faster 5G connectivity that the Cupertino, California company hopes will spur a wave of upgrades and keep its sales booming through the end of the year.

The new products will test whether Apple can ride a wave of consumer excitement around 5G wireless data networks, whose speediest variants outstrip their predecessors' data rates multiple times over.

Apple said all iPhone 12 models in the United States will support millimeter wave 5G, the fastest variant of the technology, as well as lower-frequency bands. Some rival Android devices support only the lower-frequency versions of 5G.

But whether iPhone buyers see a dramatic speed boost will depend heavily on where they are and which carrier they use - what Bob O'Donnell, head of TECHnalysis Research, called "lots of little niggly details that get in the way of delivering on the promise of 5G." 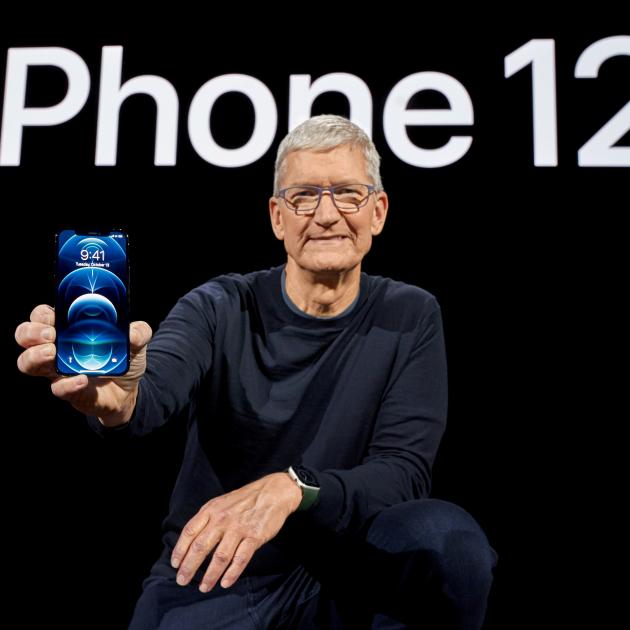 Apple CEO Tim Cook poses with the all-new iPhone 12 Pro. Photo: Brooks Kraft/Apple Inc./Handout via Reuters
He said Apple may be setting some customers up for disappointment when phones ship but offer only modest speed increases until carriers build out networks.

"I don't feel like Apple clarified that as much as they could have," O'Donnell said.

Verizon Communications Inc CEO Hans Vestberg appeared on Apple's livestream presentation to announce that the phones would work with the carrier's 'ultrawideband' 5G network, designed to alleviate bottlenecks in major cities like New York and Los Angeles, as well as in crowded areas like NFL stadiums. Apple said it had tested 5G on more than 800 carriers in 30 regions globally.

The devices will arrive about a month later than is usual for Apple's annual launches. Pre-orders for the iPhone 12 and iPhone 12 Pro in the United States, Britain, China and some other countries begin October 16 and deliveries start October 23. The iPhone Mini and Pro Max will be available for pre-order November 6 and in stores November 13.

"As the convergence of flu season with Covid and colder weather forces everyone indoors, I think it's going to be harder to sell iPhones this Christmas. As much as Apple is a technology company, it's not known for its online sales, it's known for its in-store experience," Dollarhide said.

Shares of Apple fell over 3% during the event, erasing $US77 billion worth of stock market value.

Users on Chinese social media platform Weibo complained that the livestream of Apple's event on online platforms Tencent and Bilibili Inc had been cancelled, but they said they were still able to watch it on Apple's own website. Tencent and Bilibili did not immediately respond to requests for comment.

Apple's HomePod mini is seen with an iPhone in a photograph released in Cupertino. Apple Inc./Handout via Reuters

Apple also announced a HomePod Mini smart speaker that will cost $US99 and be shipped from Nov. 16. Many of the features serve as a catch-up to similar offerings from Amazon.com Inc and Alphabet Inc's Google.

But Ben Bajarin, principal analyst for consumer market intelligence at research firm Creative Strategies, said Apple had fleshed out its vision for how its devices could interact more directly with its own speakers than rivals had. For example, Apple customers can speak into their iPhone or iPad to use the HomePod Minis like an intercom system.

"That's not something that Google or Amazon, particularly Amazon, can do so cleanly," said Bajarin. "The advantage Apple has that they pressed on is that a good portion of those (Google and Amazon) customers have iPhones. They leveraged the fact they own the pocket."

So sad to see a company which was once an innovator being reduced to a slow cumbersome follower.
Certainly, if you want a leading edge phone with the latest features, you wouldn't buy an Apple.