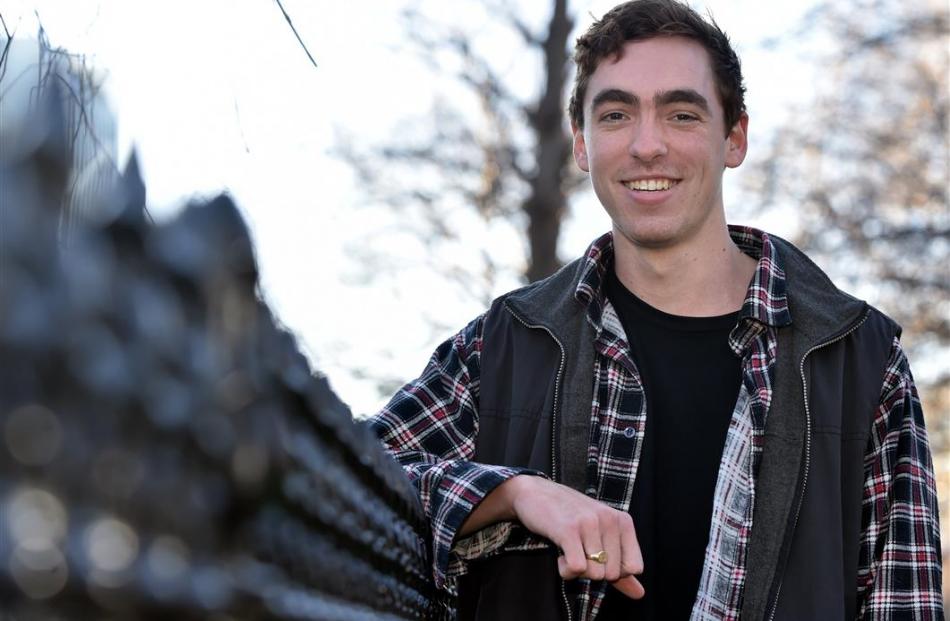 Sam Beattie is looking forward to the next round of the Audacious business challenge. Photo by Peter McIntosh.

Sam Beattie says he has "nothing to lose and everything to gain'' from his involvement in the Audacious business challenge.

Mr Beattie (21) won round one of the competition and will now further develop his business idea during round two.

That was where Audacious got more serious, with workshops covering topics including business plans, finding finance, and legal issues.

Challengers submit a detailed business plan and pitch their idea to the judges in the Dragon's Den.

The final awards will be held in September.

Audacious was not new to the University of Otago student, who first entered in 2013, during his first year at university.

Before that, he started a business with some friends while at Mount Aspiring College, in Wanaka, as part of the Young Enterprise Scheme.

That business, a clothing brand called Volume II, did well in the competition and the natural progression was to take it to the ‘‘next university level'', he said.

But Mr Beattie eventually found it difficult to balance university studies with running a business so he "called it quits''.

When it came to Audacious, he decided to continue his involvement and, last year, he entered with two new ideas.

One, which he likened to a student version of My Food Bag, was born from a trip to the supermarket when he was doing a flat shop for seven students and had to organise seven meals.

The other idea, suggested by his girlfriend, was a sugar-free RTD (ready-to-drink) and he was thrilled when both went through the first round and made the top 20.

Working on the ideas, he began to realise that My Food Bag had really claimed the New Zealand market, so he decided to focus on the RTD idea.

While he did not place in the top three, he got some excellent advice from one of the judges, Nicola McConnell, and they came up with a variation on his idea that targeted a more affluent market.

Instead of a sugar-free RTD, it was decided to focus on a pre-made cocktail and, to help with such a venture, he went to Mexico last summer.

It was during his first day on the streets that he got "unbelievably lucky'', meeting a man who owned his own tequila brand.

They went back to his office, drank some tequila and discussed Mr Beattie's plans and what he wanted to do.

"He basically became a mentor for me,'' he said.

Returning home, he entered this year's Audacious competition with his new cocktail idea and was surprised and excited to win round one.

"Now it's all started to get quite real,'' he said.

Mr Beattie, who has a commerce degree majoring in management and with a minor in Spanish, is now studying for honours in management.

He had another "crazy'' business idea that he was also excited about.

The Mexican business culture was difficult to work with and that was why he wanted to keep an open mind for other ideas he could pursue.

He was "not entirely'' set on the cocktail idea but, given it had done so well in the competition, he thought it would be stupid not to pursue it further.

As to that future, Mr Beattie said it really depended on the Audacious judges, as they were the ones who knew about business.

"They have basically the ability ... to really set my life on a completely different course, if they want to, which is pretty crazy,'' he said.

Mr Beattie was keen to encourage other students to enter Audacious, saying most people followed the "traditional footpath'' of doing well at school, then university, and then getting a job and being "part of the rat race''.

"What Audacious does is it provides a second option. You go out on your own and have a crack at it, really,'' he said.