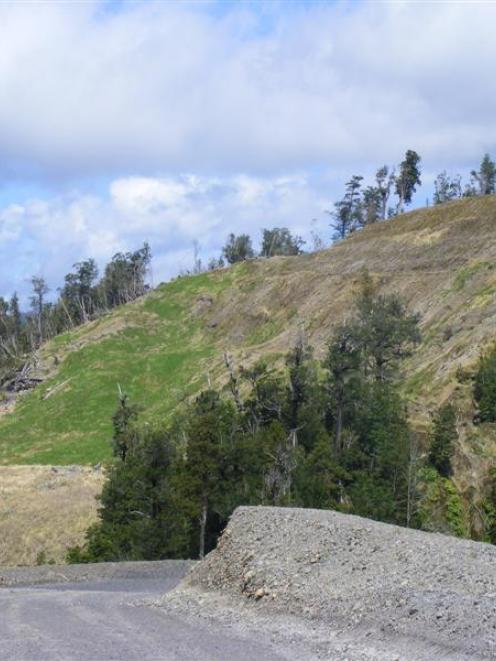 Year-old land rejuvenation slopes at Bathurst Resources' Cascade mine, on the Denniston plateau, in 2012. Photo by Simon Hartley.
West Coast coal mine developer Bathurst Resources has bought a 51ha cranberry farm in the Buller district as a propagation nursery for replacement native trees and plants.

The listed Australian company has just been granted Overseas Investment Office permission for the purchase, the cost of which was undisclosed.

Following two years of court battles over the consents it was issued by the two West Councils, which delayed the mining start-up, Bathurst is expected to begin operations this month.

While it has acquired and has continued operation of small mines at several places, including Cascade, on the Denniston plateau, Bathurst is now getting coal from new area blocks on the plateau.

Cascade is expanding from historical 45,000 tonnes production to 150,000 tonnes, while the adjacent Escarpment is targeting initial production of 500,000 tonnes.

The first coal is expected there by late March.

Bathurst said on purchasing the cranberry farm, it intended to use the land and facilities at Mount Rochfort Rd to propagate and rear native trees and plants, which would ultimately be used for revegetation on areas it mines on the Denniston plateau, above Westport.

• Bathurst expects its Takitimu mine, at Nightcaps in Southland, to produce 200,000 tonnes of coal annually for domestic supplies, while the recently purchased Canterbury Coal, near Coalgate, west of Christchurch, will produce about 35,000 tonnes for dairy processing plants.