Best of all worlds by the beaches of Karitane 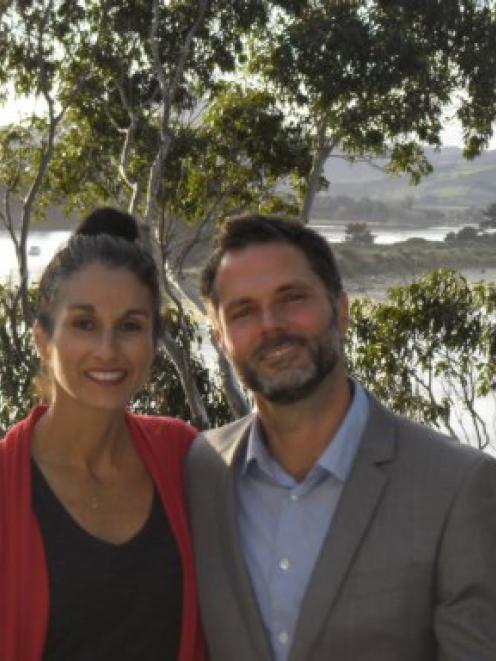 When the couple decided to make the move to running a business themselves, they left the bright lights of New York for the small seaside settlement where Ms Farry had spent holidays since she was a child.

Thanks to modern technology, the couple have been able to operate Sol Pharmacy, a healthcare business which is the online arm of LaHood's Pharmacy in Gore, owned by Ms Farry's cousin Mark LaHood, from their home.

Ms Farry took little convincing to make the move. She was keen to be closer to and spend time with her parents in Dunedin, she knew there was a good school for the children, and the settlement was familiar.

Being able to go down a pathway to the beach and then walk along the sand to school was ''very cool'', while Mr Grocott said all his business ideas were generated while walking on the beach.

''I feel as if we've been gifted a lot by being here,'' Ms Farry said.

Originally from Hamilton, Mr Grocott moved south to study at the University of Otago. Ms Farry grew up in Dunedin.

While the couple had known each other ''vaguely'' at university, they did not properly meet until a mutual friend's wedding in New York.

Mr Grocott was working at an advertising agency, while Ms Farry was doing a manuscript writing course and also some work in television.

The couple worked in New York for three years, during which time Ms Farry had a book published, but the September 11 terrorist attack on the city in 2001 saw them reassess their future.

Their apartment was ''just around the corner'' from the World Trade Centre and Ms Farry recalled how it became ''really eerie'' in downtown New York following the attack.

The economy also started heading downwards and the couple thought it would be a good time to return to New Zealand, getting engaged in Paris on the way home.

They settled in Auckland, where they were both working for Television New Zealand - with Mr Grocott doing internet analytics and Ms Farry working on lifestyle shows - and were married in Queenstown.

Two children arrived - Kahlil (now 9) and Rafi (6) - and the family later returned to New York in 2009 for a year where Mr Grocott worked remotely for TVNZ and Ms Farry did some writing teaching.

Professionally, Ms Farry loved it - ''Mark and I have got a love affair with New York'' - but it was a very different place to live with children who were used to ''Kiwi life''.

The couple started discussing the idea of an online business and, after talking with Mr LaHood, Sol Pharmacy was born.

They settled in the holiday home bought by Ms Farry's parents John and Pamela Farry when she was 6 weeks old, with expansive views overlooking the water.

Initially, Sol Pharmacy mostly sold ''natural relief'' quit-smoking products around the world before branching out into other products.

The business has grown to offer a catalogue of 8000 pharmacy and natural health products, covering everything from pain relief to make-up. There was a team of about seven staff, a mix of both part-time and full-time.

While acknowledging it was a difficult time for exporters, their client base continued to grow, particularly in the US and Asia.

Mr Grocott and Ms Farry were grateful for the support and experience of Mr LaHood, whose knowledge about both retail and the pharmaceutical side was invaluable.

The couple wanted to establish their own ''point of difference'' with the business and give something back to the community.

For every 25 orders, they donated a native tree, grown locally at Blueskin Nurseries, to be planted on the Huriawa Peninsula at Karitane.

As well as offsetting carbon, it was a way to give back to a community that had given her and now her children ''so much'', Ms Farry said.

Their plans for the business were to ''keep it Kiwi-focused and find ways of growing it'', Mr Grocott said.

Healthcare seemed a good fit for the couple, who enjoyed helping others. Their business philosophy was based around ''slowly but surely'' building it up. They were able to work ''from anywhere'', and spent the month of July in Rarotonga.

They did not need to have the infrastructure of a city ''as long as we've got people around us that are smart'', Ms Farry said.

It was the first time the couple had worked together and they found they complemented each other.

Mr Grocott was better at systems, while his wife was better at implementing things. Both enjoyed meeting people and making connections with clients.