AllBirds co-founders Tim Brown (left) and Joey Zwillinger. Photo: Cody Pickens
Footwear brand Allbirds launched in 2016 and was worth US$1.4 billion dollars within a couple of years. Two years to make more than a billion dollars sounds like a pretty good annual return.

In reality, Kiwi co-founder Tim Brown spent the first part of a decade honing his crazy idea about making shoes out of wool, before they became the success story they are today.

Luckily, Tim had years practising his tenacity after a career as a professional footballer. After finishing school, he travelled the world, struggling to get a solid footing with any one team.

Then, he lucked on a position back in New Zealand, playing for the Wellington Phoenix.

Making a Fifa World Cup team with a Kiwi team might have seemed a far-fetched goal to many, but that's exactly what Brown had always dreamed of. In 2010, he made that happen, was freed of his football aspirations, and ready to get into the serious business of making shoes.

For most people, playing professional sport would be enough to keep them out of trouble. But throughout his playing career, Brown kept the idea of a career in design ticking over. In one of his off-seasons, he took a pivotal fact-finding trip in China. 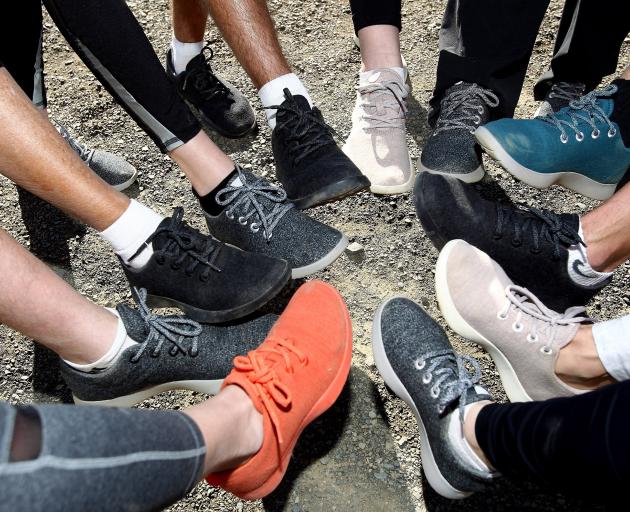 Allbirds has had a focus on using sustainable materials in its Merino wool shoes since its inception. PHOTO: GETTY IMAGES
"I found a footwear factory on Google and thought 'I'm going to dive in'.  In the off-season, I took a trip and started visiting footwear factories. It was like woah, this industry is massive, it's enormous, and it's incredibly manual and basic. It defaults to using really cheap materials and isn't there an opportunity to do things a bit differently."

From there, he decided he'd be guided by three principles: design, comfort and sustainability.

Brown battled through the initial stages of building Allbirds; coming up with prototypes and having to develop a shoe to give to people who invested in his wildly successful Kickstarter campaign.

But it was taking its toll, and he was ready to quit, before meeting co-founder, Joey Zwillinger. Their wives had been roommates at college, so they met to discuss where Tim was at. Over a couple of days, they created the future of Allbirds.

"We just imagined this business. And I think really importantly, (we) imagined a business we would tell our grandchildren about. I think I found in Joey, and his vision around the environment and climate change, I found the purpose that had been missing up until that point.

"I'd been making shoes, making them out of wool and those were really important things but if you're going to go over all the hurdles you need to, all the pain, all the hard work, it needed to be for something bigger."

They were still based in Joey's mother-in-law's garage, but they'd raised $2 million in seed funding, and Tim had renewed focus on his goal on making sustainable footwear. They were still being told that their strategy of just selling one kind of woollen shoe, and only selling online, was impossible.

"And I think it was a real test of our philosophy. We stuck to our guns. We launched one shoe. You have these moments where you have to back yourself."