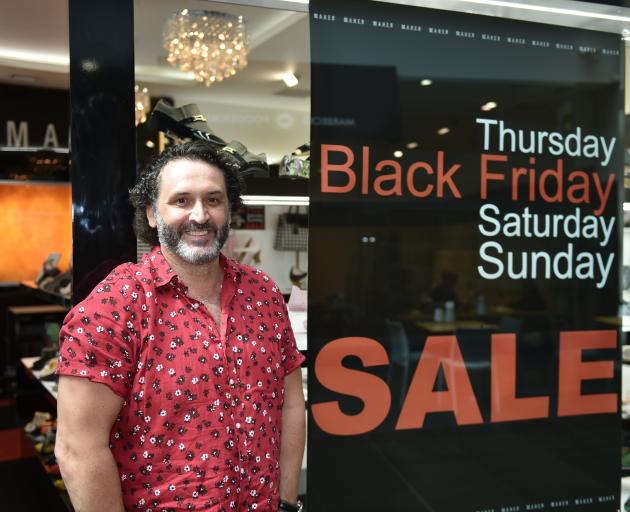 "We got caught off guard ... two years ago when it was just beginning to become a real big thing and we hadn’t considered it and our sales absolutely died over the four or five-day period because we didn’t have any Black Friday sales on.

"We learned the hard way."

Now the owner of Maher Shoes, which has stores nationwide and just opened in Sylvia Park in Auckland, is making the most of the traditionally American sales day.

"I think that’s just a lead-on from Covid, people are used to [online now] ... but also the shops are doing extremely well," Mr Maher said.

He said the company was not "hanging our business on it" when it came to Black Friday but it was one of the most important weekends on the calendar for the shoe shop.

Black Friday was an American shopping tradition where retailers marked the day they "hit the black" for the year or started to earn money.

Suits on Wall St owner Martyn Ballantyne viewed Black Friday differently, saying his store did not put a lot of weight on the sale weekend.

"We don’t buy in a lot of stuff to sell it off cheap on Black Friday ... we’ve got a couple of promos on, but we aren’t doing huge things."

Golden Centre manager Nina Rivett said Black Friday was an event that was growing bigger every year and was the precursor for Christmas shopping to begin.

"In terms of being close to Christmas it’s the perfect opportunity for people to come in and obviously purchase some of our Christmas items but also take advantage of the deals as well," she said.

The Golden Centre, the Wall St Mall and the Meridian Mall were all co-ordinating events today, she said. They would have live entertainment and competitions with prizes for people coming through.

Otago Chamber of Commerce chief executive Dougal McGowan said Black Friday was a day dominated by big box stores, but it was important to remember the smaller, local retailers "that we know are so important to our retail ecosystem".

He said shoppers should try to smooth out their spending to help retailers avoid the lumpiness of one weekend with high sales, but the next being well short of that.

"It’s certainly up there with Boxing Day.

"This year we’re expecting it will be bigger ... many retailers are keen to get in behind it, offer some deals to customers and get some cash in the door ahead of the Christmas rush."

Mr Harford said people not travelling overseas and having extra money to spend was a key factor.

Supply chain issues because of a hold up in the Ports of Auckland and Covid-19 flow-on effects would also be an incentive for people to buy what they could get their hands on now, he said.

But, not all retailers "at the small end of town" were on board with Black Friday and instead prided themselves on what they offered all year round.

"... and often those businesses may hold their prices rather than discounting," Mr Harford said.