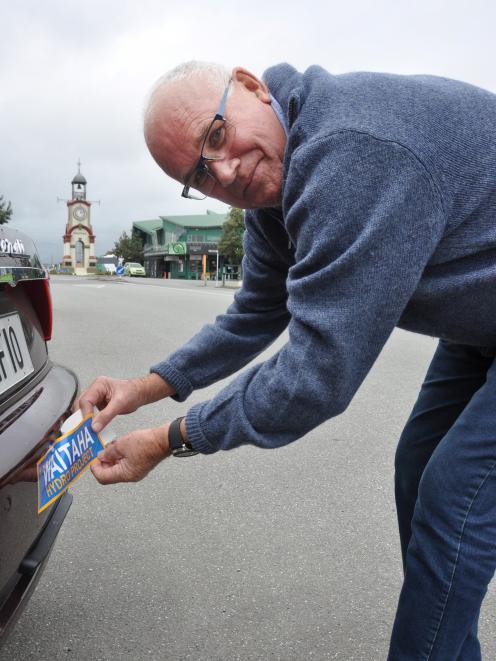 The message ''I Support the Waitaha Hydro Project'' is hoped to bolster support and draw attention to the fight to overturn Environment Minister David Parker's decision in August that left the $100 million Westpower project dead in the water.

It is hoped that the pushback, which also includes a petition, will lead to the decision being revisited.

''Common sense has got to kick in here at some stage,'' Mr Hustwick said.

''I have difficulty understanding why the decision wasn't positive - it's low-impact and great for security of supply.''

As a power trustee for the past 19 years, he has watched similar schemes get up and running, including the Amethyst River scheme at Hari Hari.

''The Amethyst is a 7MW run-of-the-river hydro project and it is sitting down there quietly humming away, and I doubt very many people actually notice it's there.''

The Waitaha, which did not require a dam, was proposed for the upstream end of the remote Morgan Gorge, and would have been less obtrusive.

However, the minister said establishing the power scheme there would significantly affect the natural character of the area and people's enjoyment of it.

Kayakers, who regard the whitewater of Morgan Gorge as among the best in New Zealand, were among those opposing the project.

Westpower chairman Mike Newcombe said West Coast interests and long-term benefits had been ''swept aside for the sake of environmental interests''.

''It calls into question the extent to which this Government really does have an intention to support regional economic growth and is genuinely committed to addressing the significant threats from climate change through renewable energy projects.''

The project would have delivered enduring benefit for the community and broader region, Mr Newcombe said at the time.

''It has been knocked back in capitulation to minority interests intent on locking up the West Coast forever, to the detriment of the local community.''

Generating electricity on the West Coast would have increased energy supply, reliability, self-sufficiency and, ultimately, resilience in the event of a natural disaster. It would have created jobs and increased business confidence, he said.

National Party leader Simon Bridges and West Coast-Tasman MP Maureen Pugh have joined Westpower in criticising the decision, which came three years after the Department of Conservation agreed in principle to the 22MW proposal.

Mrs Pugh warned that West Coasters would not accept the decision and would fight it, together.

''This is yet another nail in the coffin of the Coast. This one truly is hard to stomach - 100% renewable, community-owned, profits returned to locals, supported by Tai Poutini Conservation Board as well as Ngati Waewae and Makaawhio, and Department of Conservation even notified its intention to grant the concession in 2016.

''The only reason I can work out for it to be declined is because it is being used as a political bargaining chip,'' Mrs Pugh said.

Mr Bridges said if the Government was serious about a renewable energy future, Waitaha should go ahead.

Westland Mayor Bruce Smith said it felt like all of the region's major industries were being targeted by the Green-Labour Government.

-From the Hokitika Guardian

It was declined because the Greens are no longer about the environmental responsibility. Their focus is about removing humanity from the environment.