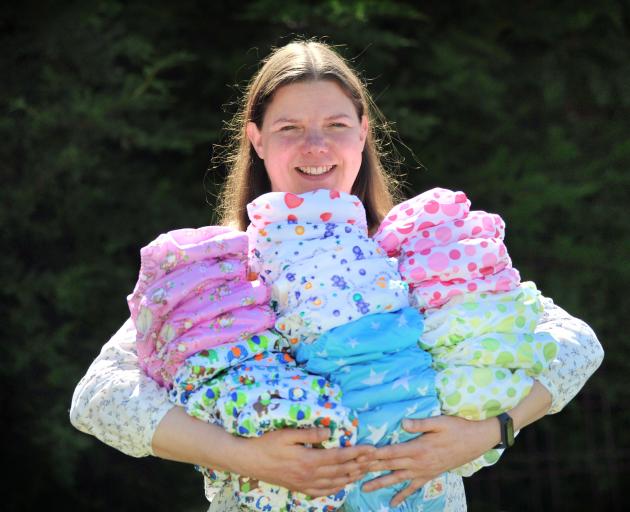 That was about 14 years ago when her first son was born and she sewed his nappies.

Next month, her Nappyneedz business will turn 10 years old and it has grown to include two other workers — one of them her husband.

"When we moved here I was making them for my second son and then decided, after a couple of years, to actually set myself up a business," Mrs Sweeney said.

"I built myself a website and was sewing them myself."

From there things grew, picking up speed to a point where demand meant production had to go overseas.

"We’d like to move manufacture back here but it’s been really difficult," she said.

Mrs Sweeney said she had struggled to find factories or contract sewers able to produce the nappies in New Zealand.

"The very few left in New Zealand who are still manufacturing garments here are so busy that it’s been impossible to get them to produce anything for us.

"We have had some woollen nappy covers made here, at Otago Knitwear, but we really want to get the nappies and menstrual pads sewn here."

The business started as something she would fit around the children but when all of them started to go to school the nappy business became a fulltime job and not long after her husband was included in the business.

"So it’s grown well beyond what I expected."

She has a degree in history and has worked in a variety of jobs but nothing to do with manufacturing products.

Cloth nappies were an important option for parents as they saved money — "thousands of dollars on a first child alone," she said.

"Compared to the cost of ongoing disposables and the actual throwing away of them, your only other cost is washing ... it’s tiny."

There were also huge environmental benefits to reusing a nappy versus throwing disposables away, she said.

Mrs Sweeney had been working with high schools to give teenagers more access to their reusable menstrual products and she wanted to expand that to more teenagers.