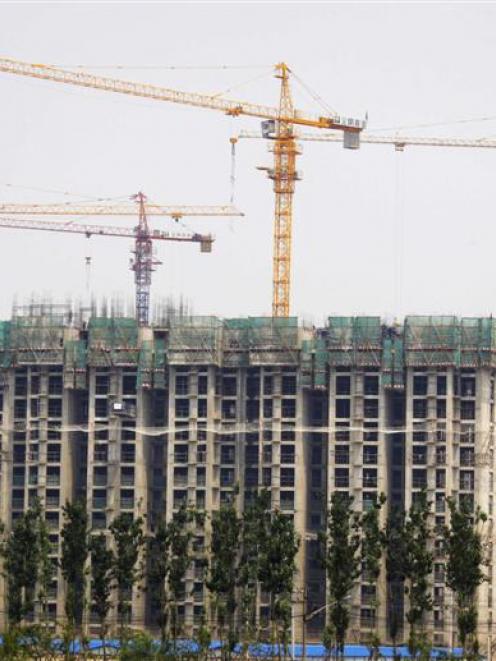 Housing prices are falling in Beijing but not fast enough for most young people. Photo by Reuters.
Chinese inflation hit a 29-month low in June but still people are complaining about the rising costs of food and high housing prices. Business editor Dene Mackenzie was in China last week and reports on the economic situation of New Zealand's second-largest trading partner.

For many economies, China holds the key to their survival.

Cash-rich China has been responsible for buying up bonds in the United States as fast as the Federal Reserve can print them.

European economies also have reason to thank China for bailing them out in their own debt markets, even if criticism is rising that China - seen as the global powerhouse economy - is not doing enough.

China remains strategically important to Australia, New Zealand's largest trading partner, and hence New Zealand. China is the world's second-largest economy, surpassing Japan and sitting behind only the US in size.

But things are not all well in China, as the global financial squeeze is starting to hurt people of all ages just trying to get ahead.

In fact, the problems familiar in New Zealand, of higher food prices, rising housing costs, an ageing population and employment issues, are common enough throughout China.

Also, the Government has stepped in to regulate where nomadic herders in Central China can and cannot graze their animals, such is the worry about over-grazing and global warming.

Media reports said that a few years ago, herders could rely on knee-high grass at this time of the year. Now, barren hills and hectares of brown earth greet them.

The China Daily reported that not all herders were happy with the regulation, their families having lived on the plains for generations. One, who had 84 sheep, was critical that any government official could tell him where and when to shift his flock.

Young people are finding it hard to find jobs that pay enough for them to think about leaving their parents' home and moving into their own place.

One of the guides on my recent tour of China recalled that a few years ago her cousin had married a man earning 100,000 yuan ($NZ20,000) a year, to the delight of the family. The salary was regarded as substantial.

Now, the guide earns more than 100,000 yuan a year but struggles to make ends meet.

Housing advertisements advertise rental accommodation from $NZ200 a week up to $1000 a week.

Not that long ago, people wanting to buy a house had to have a 20% deposit. That grew to 30% and is now 40%. Chinese Prime Minister Wen Jiabao pledged last week to maintain stringent bans on real estate speculation, prompting a slide in mainland Chinese stock markets.

Food prices, which account for nearly one-third of the consumer price index (the New Zealand official measure of inflation) increased nearly 4% in the year to June.

People are starting to feel a financial hurt that annual GDP growth of more than 8% for China tends to hide.

However, the prices for manufactured goods continue to tumble, as the flood of goods pouring out of Chinese factories far exceeds the slowing demand from Chinese households and businesses.

The downward trend makes it much harder for businesses to sell enough goods to repay loans they took out, usually on the expectation of rising prices.

Falling prices are encouraging Chinese consumers to delay purchasing big-ticket items, in the belief that prices will fall further.

Being interested in technology, I ducked into as many computer and mobile phone shops as I could during a five-day visit to Shanghai and Beijing. Surprisingly, "real" iPhones were about $NZ100 more expensive in Shanghai than Dunedin. Big brand PCs and laptops were also more expensive.

Of course, you could buy a "uPhone" for a remarkably cheap price and there were plenty of knock-off laptops for sale. But quality technology goods in both Shanghai and Beijing appeared more expensive there than here.

The slowdown was well illustrated by Elaine Yan, the manager of the import and export department at Wuxi International, a trading company that sells leather gloves, handbags, scissors and embroidery.

"Business is slower and more challenging this year compared to the same period last year. I would say prices are down overall by 5% this year," she said.

Sopheia Wang, the sales manager at Kunshan Tianyuan Precision Industry, a manufacturer of coffee pots and mugs based near Shanghai, said her company had resisted cutting prices so far because the local minimum wage had risen 21% in June.

"With the global economy not doing well, we are looking into developing the domestic market for our products, rather than actively adjusting downwards our pricing."

HSBC China economist Sun Junwei, said that month-to-month price data was not seasonally adjusted and June had historically been a month of lower prices. Adjusting for that pattern could mean that consumer prices were flat in June, compared with May.

But consumer and producer prices were clearly slowing even faster than expectations, strengthening the case for further economic stimulus in China.

There has been a rebalancing of the Chinese economy, according to China's customs agencies.

In Hangzhou, the latest figures showed that although the export and import volumes of Zhejiang province dropped sharply in the first four months this year, total volumes exceeded $NZ32.4 billion in the five months to May, an annual increase of 7.6%.

In Shanghai, export and import volumes for the first five months exceeded $NZ192 billion, a 3.8% rise on the previous period.

But traders said business with the European Union had been hit hard.

Orders from European clients had dropped by at least 30% compared with last year, while there had been a 5% rise in order from South American countries, Yiwu Hongxu Trading Co manager Jiang Kexing was quoted as saying.

All the trading companies Mr Jiang knew were trying to improve their profit margins by getting out of the markets affected as the European slump continued.

"Switching to regions and countries that haven't been affected by the European debt crisis is the obvious way to avoid losses.

"Clients in developing economies seem very interested in our products, which has allowed us to have some relief from the worsening markets in Europe," he said.

Companies producing high-tech items say they have been largely unaffected by the slowing economies although changes had been made to adapt to the prevailing conditions.

Some companies are noticing clients putting more emphasis on quality. Lower material and labour costs no longer represent the advantage to China they once did, so companies are switching to the middle and high-end of the market instead of struggling in the tough competition of the low-end market.

While on a tour of Jiangsu province, Mr Wen called for more aggressive efforts to reset and fine-tune fiscal policies because economic pressures remained huge.

He said the economy was running at a generally stable pace but there was still pressure for it to go downward.

The Government should manage its policies more aggressively while sticking to proactive and prudent monetary policies.

Attention should be paid to improving structural tax reduction measures and resolving structural problems between credit supply and demand and to make government policies more targeted, forward-thinking and effective.

To buoy the economy, China has adopted a string of pro-growth measures, including lowering banks' reserve ratios to boost lending, subsidising energy-saving household electrical appliances and speeding up approval for major construction projects.

• Dene Mackenzie travelled to China with the assistance of Air New Zealand.