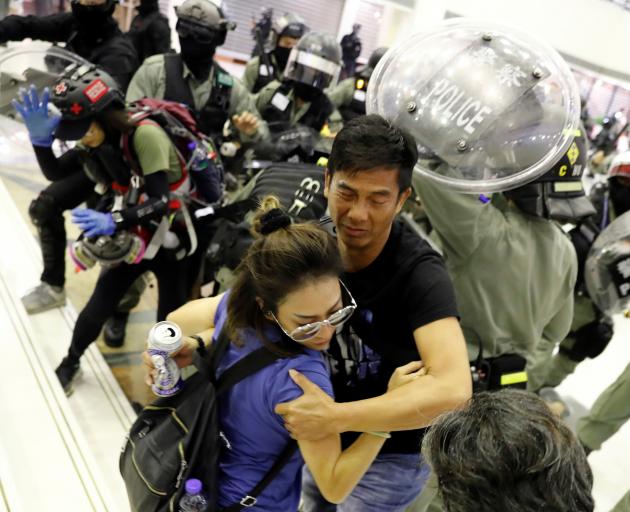 Hong Kong anti-government protesters crowded a shopping mall in running clashes with police on Sunday during which a man with a knife slashed several people and apparently bit off part of a local politician's ear.

A human chain in Cityplaza, in the eastern suburb of Taikoo Shing, turned into a face-to-face conflict with police, running up and down escalators where families with young children had been window shopping just minutes before and watching skating on the ice rink.

Police said protesters had vandalised a restaurant in the mall after a peaceful chanting of slogans in the 22nd straight weekend of protests by Hong Kong people furious at perceived Chinese meddling in the former British colony which returned to Chinese rule in 1997.

Several people were wounded, with one man in a white tee-shirt, believed to be the knifeman, being beaten with sticks by protesters. Another man lay in a pool of blood on the pavement outside the mall. 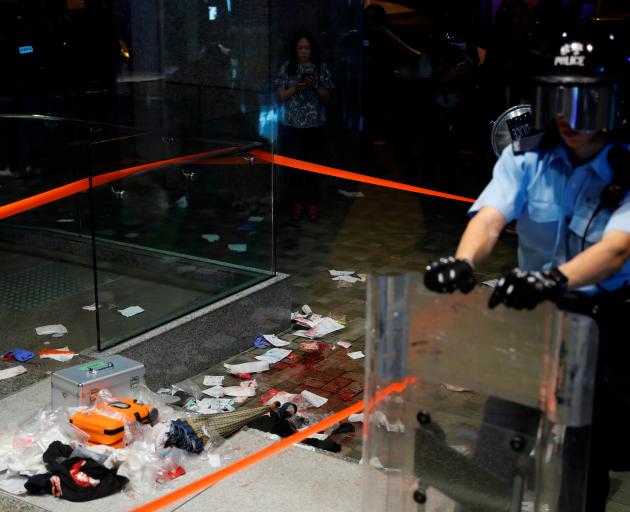 A view of the scene where Andrew Chiu Ka Yin, District Councillor of Taikoo Shing West, was injured in a knife attack during anti-government protest at a shopping mall in Hong Kong. Photo: Reuters

Democratic district councillor Andrew Chiu was among the wounded, blood dripping from his ear. Democratic Party lawmaker James To told reporters the knifeman had bitten off part of Chiu's ear and slashed other people.

He said the other wounded were in more serious condition than Chiu who was seen on TV holding the piece of his ear in a plastic bag with bloody hands.

A kitchen knife lay on the ground outside the mall.

Police made several arrests as protesters shouted "black police!", a reference to their perceived brutality. The standoff lasted into the night, with residents jeering police from the roadside and balconies of nearby apartments, chanting "leave now" and more colourful Cantonese expletives. 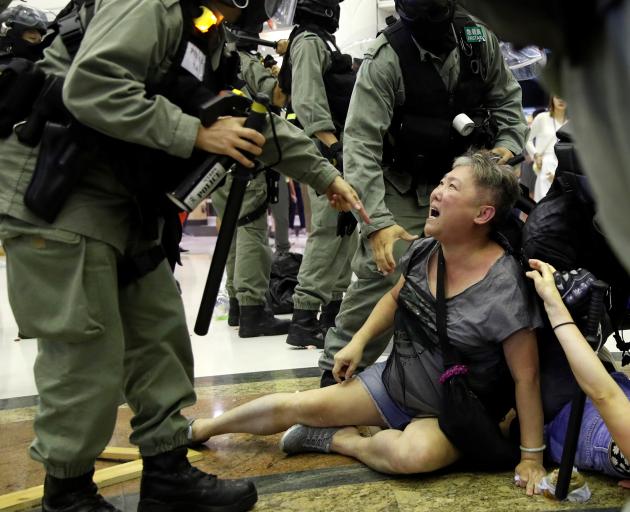 Riot police detain a woman during a protest at a shopping mall in Tai Po, Hong Kong. Photo: Reuters
Police fired tear gas, outside the East Hotel in Taikoo Shing, to try to break up the crowds. They then left.

"These police are not what they used to be," said Julie, 24, giving police the middle finger. "They come in here and push us around. It is not right."

Police fired pepper spray at reporters when they got too close. One journalist was arrested.

“This is out of control. This was a peaceful protest. And these people are just local residents, we live around here,” said Desmond Fong, 28, who works in marketing. He was out shopping for sneakers when the protest erupted.

Taikoo Shing is an office and high-rise apartment development dating back to the 1970s, with the newer office, bar and restaurant district of Quarry Bay next door. Police said they were investigating the knife attacks. 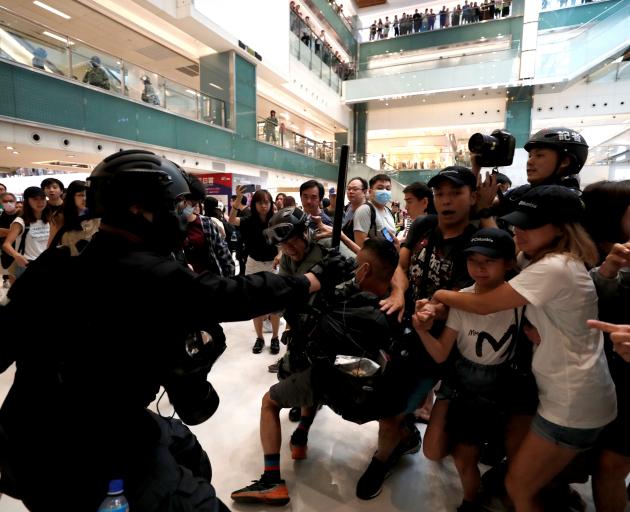 There were also running battles, vandalism and scuffles in and around malls in the New Territories towns of Tai Po, Tuen Mun and Sha Tin, where police fired pepper spray as protesters hurled abuse. Protesters built a street barricade in Tai Po.

They have vandalised Hong Kong businesses seen as being pro-China and in July daubed China's Liaison Office, the key symbol of Chinese sovereignty, with graffiti.

Cleaners swept up broken glass at the Hong Kong office of China's official Xinhua news agency on Sunday, one of the buildings vandalised as activists hurled petrol bombs and set fire to metro stations. 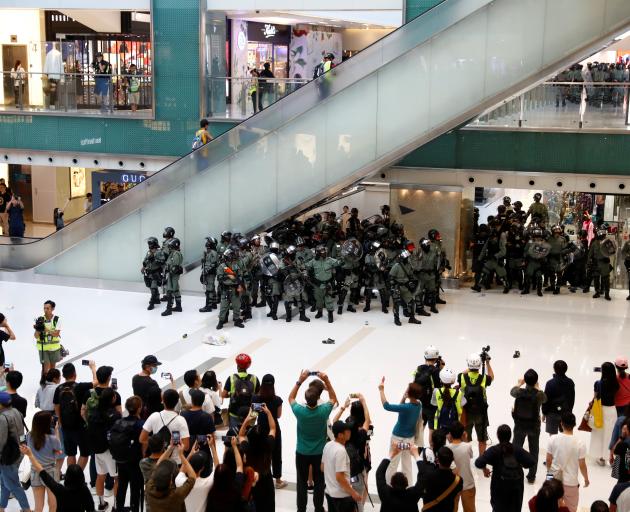 Xinhua condemned the attack by what it said were "barbaric thugs" who broke doors and security systems and threw fire and paint bombs into the lobby.

"The practice of the black rioters once again shows that 'stopping the violence and restoring order' is Hong Kong's most important and urgent task at present," a spokesperson for Xinhua said in a Facebook post.

Police fired tear gas, rubber bullets and a water cannon at protesters on Saturday and early Sunday as the violence spilled from Hong Kong island across the harbour to Kowloon. One of the protesters' key demands is an independent probe into perceived police brutality.

There have been several injuries during five months of unrest, including a protester shot in the chest and a policeman slashed in the neck, but no deaths since the protests began in June.

Hong Kong returned to China under a "one country, two systems" formula which guarantees its freedoms for 50 years. China's People's Liberation Army (PLA) has a garrison in Hong Kong but troops have remained in barracks since the protests began.

Protesters last month targeted a PLA barracks with lasers prompting troops to hoist a banner warning they could be arrested. Senior PLA officers have said violence will not be tolerated.