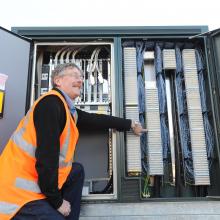 PHOTO: ODT files
Chorus chief executive Kate McKenzie says the company is expected to track towards the top end of its full-year profit guidance after reporting half-year results yesterday in line with expectations.

Chorus reported an operating profit of $329million for the six months ended December, down 1.8% from the previous corresponding period.

The dividend was increased by nearly 6% to 9c per share.

Ms McKenzie said while the impact on revenue of lost lines from previous periods was apparent in the financial results for the period, it was pleasing the line loss trend showed signs of abating during the half.

During the half year, Chorus continued its campaign to promote better broadband and that, coupled with an expanded field force of workers, helped drive a strong increase in fibre and VDSL (very-high-bit-rate digital subscriber line) uptake while also slowing connection losses to other networks significantly, she said.

Losing 5000 broadband connections in the six months, largely as anticipated to other local fibre companies, was a positive outcome.

Ensuring line loss trends continued to improve would be strongly influenced by improvements Chorus could make in customer experience.

For example, Chorus was aiming to consistently deliver one-day installations for fibre by the end of the next financial year, Ms McKenzie said.

"In that context, I was pleased to see average lead times for fibre reduce from 22 days to 14 days during the half year, despite record order volumes.''

Despite the pressures in the New Zealand construction industry, the company had kept its fibre rollout costs within plan and it was maintaining a tight focus on other costs, Ms McKenzie said.

Forsyth Barr broker Suzanne Kinnaird said below the operating profit line for Chorus, it became ``quite noisy'', particularly with depreciation and amortisation given the impacts from capitalisation of costs relating to accounting changes.

Capital expenditure guidance was changed. Chorus was now ``tracking towards the top half'', reflecting continued high demand for fibre.

The company had also indicated staff numbers would drop by 10% following a wider retail adoption of automated fibre provisioning and other process improvements.

"This is an earlier reduction in the headcount than we currently assume in our forecasts,'' she said.

During the half year, Chorus announced a further agreement with the Crown to extend its UFB rollout by another 54,500 premises.

In total, more than 87% of the population would have fibre available to them by 2022 and Chorus was responsible for about 75% of the availability.

Also, Chorus was continuing to invest in the performance of its copper network, including a $20million programme to deploy VDSL vectoring technology (increasing broadband speed without fibre) in rural and other fibre company areas. A further 260,000 premises had the potential to receive improved broadband performance, she said.

"Chorus is investing about 60% of its revenue in rolling out fibre broadband infrastructure for New Zealand.

"Certainty for investors is clearly of paramount importance and we urge the Government to progress the legislation underpinning the sector's regulatory framework.''