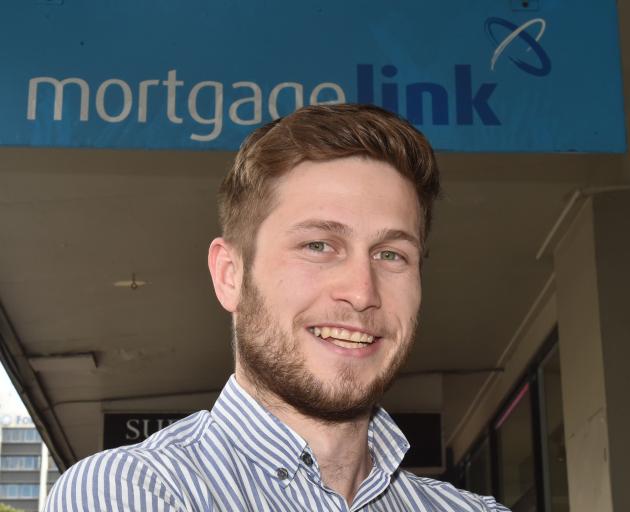 Mortgage Link Otago adviser Ben Fleming says it is clear the property market in Dunedin has not dropped. PHOTO: GREGOR RICHARDSON
The impact of Covid-19 on the property market may not be as dramatic as previously thought because of returning New Zealanders who are keen to buy.

After predictions of a property collapse, the Reserve Bank's latest survey of expectations is now forecasting the house prices index to fall by 1.38% by this time next year.

The forecasts are a lot better than its previous prediction of a 5.49% decrease.

He said returning New Zealanders, coupled with a shorter-than-anticipated lockdown, were playing a key role.

"What we saw leading into lockdown was a lot of Kiwis coming home," Mr Kerr said.

"I mean, where else would you want to be in the world right now? And you know that that still continues to trickle through.

"So more people equal more houses, and the more demand for houses on a stock that isn't increasing as much puts pressure on price."

Mortgage Link Otago adviser Ben Fleming said it was clear the property market in Dunedin had not dropped.

"We are seeing a number of people come back — whether from overseas or certain areas around New Zealand — to the local areas, to the more cheaper areas compared to the bigger cities."

There had not been large numbers coming back from overseas, Mr Fleming said, "but I’m sure we’ll see that pick up."

He said Mortgage Link had a large number of buyers wanting property but stocks were low, with 230 to 250 houses for sale in Dunedin.

It was probably the lowest he had seen it, he said.

"Whether that’s because people aren’t putting their properties on the market or they’re just getting snapped up as quick as they’re coming on but . . . the stocks are low, especially in that first-home $350,000 to $450,000 space."

Stewart Mitchell is a mortgage adviser covering Queenstown and Wanaka. He had been contacted by New Zealanders overseas interested in buying, but few had followed through on the idea yet.

Some expatriate New Zealanders who had been planning to move home in five to 10 years were now bringing that forward to sometime in the next three years, he said.

"It’s happening, for sure.

“There has also been a reasonable level of activity in the upper price bracket which indicates confidence in the market," QV property consultant Tom Patterson said.

Dark clouds were gathering for Queenstown, though, the QV report said.

Any transtasman bubble was a way off and the wage subsidies coming to an end in September and October could be "realisation time for some property owners".

"The regions really have surprised us, on the upside.

"We are seeing more people moving into the regions, particularly out of Auckland, and some of the other cities," he said.

That's not a good sign. Young people can't buy their first home because the price of homes is grossly inflated. There is little value in many of the homes on the market. Many are pure crap but people need places to live. I wish kiwis would read between the lines concerning the economy. The new Zealand economy is balanced on the head of a pin because of all the money the government has pumped out to keep it afloat. Things are going to start getting bad when the wage subsidy ends and the government has no idea how hard things are going to get. They lied about unemployment, they lied about the economy and they won't admit how bad things could potentially get between now and Christmas. Look at all the bussiness closing, unemployment is high they just changed how they measure it. Start preparing now for what's going to happen when the wage subsidy ends.